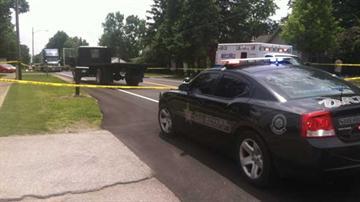 KOSCIUSKO COUNTY, Ind. -- A 4-year-old boy was killed Wednesday afternoon when he was hit by a truck in front of a mini mart on SR15 in Silver Lake.

According to the Kosciusko County Sheriff's Department, emergency personnel responded at 1:42 p.m. Wednesday to State Road 15.

Deputies say Logan was walking to the mini mart with family. While they were waiting to cross the street, Logan darted into traffic.

"All 3 of them were standing right there, they even had a dog with them on a leash and that boy, he just jumped," said Slone.

Slone said there wasn't anything anyone could do.

The driver of a 2001 Freightliner flatbed truck attempted to brake and swerve but couldn't avoid hitting Logan.

"That driver, he did everything that he possibly could to stop that big truck," said Slone.

The driver was able to stop the truck fairly quickly.

"Which led our officers to believe he wasn't speeding during the time of the crash," said Chad Hill of the Kosciusko County Sheriff's Department.

The driver was unable to avoid hitting Logan, who died at the scene.

The community has created a memorial to Logan near the accident scene.

The town clerk and town marshall set up a memorial fund to assist the family with funeral costs. You can make a donation at any Lake City Bank.