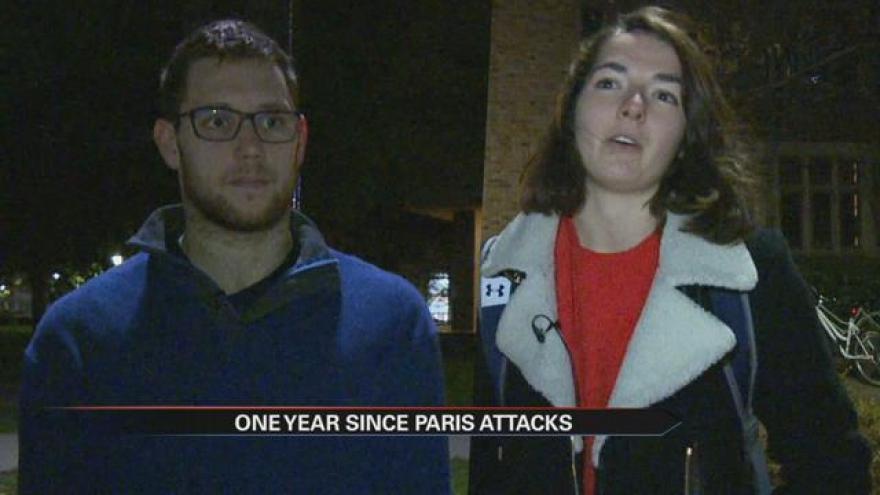 Sunday marked the one year anniversary of the attacks that killed 130 people in Paris.

With the River Lights in South Bend changed purple in a tribute to the victims, Michiana residents grieved for Paris with the rest of the world.

Two Notre Dame students from France shared their experiences of that day.

Junior Marie-Anne Roche was born and raised in Paris, where her parents and sister still live.

“It was kind of hard being far from home in a moment like that, it’s kind of something I would have wanted to be home for. I just remember being very upset and sad during the whole day,” said Roche.

Ben Jany, also a junior, is from southwest France. While his parents and brothers weren’t in the city during the attack, Jany says many of his friends live there.

“I was really starting to freak out because I don’t know what’s happening. I didn’t know how my friends were doing, if they were ok, if they were in the middle of the shooting or not,” said Jany.

Thankfully, their family and friends were all safe.

“It’s definitely really sad to know that even though it didn’t happen to me, it happened to other people,” said Roche.

Roche visited her family in Paris when she went home for Winter break. While the city was still mourning the victims lost in the attacks, Roche says she was impressed in how the city handled such tragedy.

“People were still outside at cafes and just going on with their lives, which I think is great. French people know how to enjoy life and they continue doing so. You have to move on, but yet you still have to remember,” said Roche.