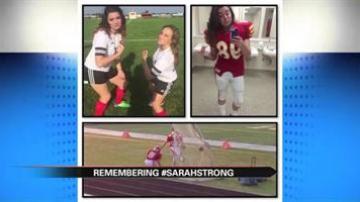 ELKHART, Ind.-- Around this time last year, the entire stadium at Elkhart Central was filled with purple to honor an Elkhart teen who was battling stage four colon cancer. Now that girl's sister is on the football team.

Although Sarah Crane lost her fight with the disease, her older sister is honoring her memory by playing on the football team.

“Getting tackled by a monstrous guy because I'm sure it will not feel good, all the guys told me I really don’t want to get tackled so that’s probably my fear right now. That, or missing every single kick that I have," said Crane.

Crane said her Charger teammates have been nothing but supportive.

Crane said, “When we went to the scrimmage last week, a lot of the guys didn’t realize that I was a girl until the end when we shook hands because my hair doesn’t fit in the helmet obviously. All the guys on my team are really supportive and I don’t know if Elkhart Central knows that we are a part of the team or not but I know the entire team has my back.”

The battle of the Mangy Lions kicks off at Charger Field at 7:30.