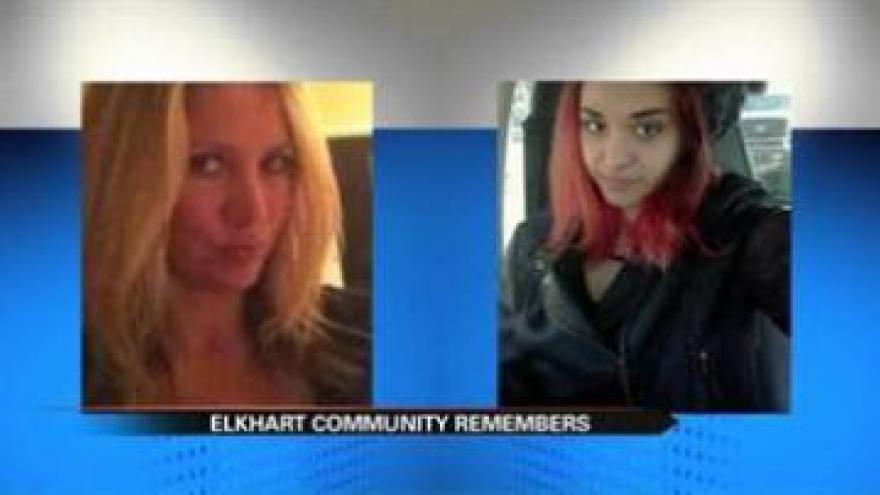 Yellow tape still stretches across the parking lot of the Martin’s on Bristol Street in Elkhart.

It’s now accompanied by a sign that reads , “Join us in remembrance and prayer.”

Rachelle Godfread and Krystle Dikes were gunned down inside the store Wednesday night.

Friends of Krystle say this loss is heartbreaking.

“Krystle was a really good girl. She was nice, very kind in high school. And she got along with everybody. She was very popular and everyone loved her,” said Nathaniel Mccord Jr.

Krystle was stocking the shelves when the shooter opened fire.

She died on the scene.

One store employee who got off work at 6 p.m. Wednesday described how difficult the last 24 hours have been.

“It’s just so surreal to think I was just at work yesterday and everything was normal,” said Emily Hoppner.

And her mother says she does not wish the fear of not knowing whether your child is alive or dead on any parent.

“As a parent to find out your child is alive you feel almost guilty over the joy,” Robin Hoppner explained.

Wallace Henderson says it is a blessing he wasn’t there at the time of the shooting.

“Normally I’m here after 10 o’clock almost every night. And for some reason I felt I needed to wait until the next day. And I find out this happened. So to me, God warned me not to come," said Henderson.

Henderson who is a regular at Martin’s says he’s now planning a candlelight vigil this Saturday at 8 p.m. in front of the store.

He’s hoping everyone will come show their support for the victims, their families, and the entire Elkhart community.

“I honestly thought there would be more flowers and more candles. And I felt like it was the right thing to do because there are souls that are gone now,” Robin Hoppner said.

Friends of Krystle Dikes are also hoping to put together a charity basketball game at Elkhart Central High School to help raise money for the family during this difficult time.