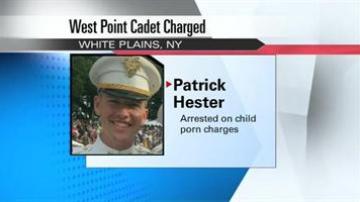 GRANGER, Ind. -- A Granger native who is a senior cadet at West Point Military Academy was arrested on child pornography charges Wednesday in New York following a year-long investigation by the Department of Homeland Security.

Stevens says he has known Hester since he was a teenager and spoke highly of him.

"A leader among his peers in high school, and really stood out as someone who seemed like they had a bright future ahead. You know, just a sharp kid," said Stevens.

To attend West Point, you need good grades, a history of community service and a congressional nomination.

Without a congressional nomination, the chances of getting in are slim. Patrick Hester was nominated by Indiana Senator Joe Donnelly.

We reached out to Donnelly to see why he picked Hester back in 2008.

Members of his office said Donnelly wasn't available to speak, but he considers qualities like leadership ability and personal character.

Stevens is in the process of reaching out to Hester and his family as they deal with what will likely be a lengthy court process ahead.

"All of us are just a few bad choices away from ruining our lives, or ruining the lives of others," said Stevens.

Hester faces anywhere from 5 to 30 years in prison if convicted.