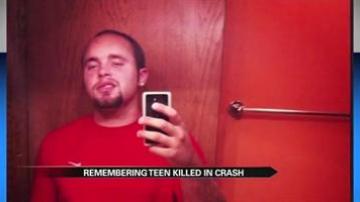 LAPORTE, Ind. -- For the second time in just over two weeks, residents of LaPorte are mourning the death of a young man. Skylar Kleine, 17, was killed Tuesday when a semi struck his car.

Police say Skylar was driving when he ran through a stop sign on County Line Road at State Road 2. A semi crashed into his car.

Skylar died at the scene.

Skylar's roommates say his death comes as a big shock.

"His friends and his family knew that the kid had the biggest heart, he would do anything for anybody he loved," said Carlos.

Although Carlos says he is a Michigan fan, he wore Skylar's Ohio State sweatshirt as a tribute to his friend.

"The first sweatshirt I saw was this one, and I was like he would love to see me in this sweatshirt," said Carlos.

Carlos and two other friends lived with Skylar.

"I was hoping that the worst that was going to happen when I got to the hospital was that he was going to have a cast on his arm for a couple days, I was not ready for this," said Justin Garrett.

"Part of you gets taken, you know, when he go away, part of you go away too," said Rahim Neal.

Skylar was only seventeen years old.

Carlos says he was finishing his high school classes online while working full-time at loren's pool and supply.

"If there is a circle you want to be in, you want to have him on your team through whatever," said Neal.

At the end of September, 17-year-old Jacob West died on the football field at LaPorte High School.