Friends shocked anyone would want to kill David Locey 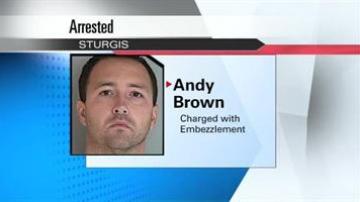 Cathi Abbs the Executive Director for Sturgis' Chamber of Commerce said, “Once the cameras are gone and the attention in the media is gone, the effects of this loss will go on for months and years.”

Andy Brown was arrested and charged with embezzling over $100,000 from Locey's office.

Thursday afternoon, crime scene investigators were on scene looking for additional evidence outside the office.

The prosecutor said that more information will be coming out next week regarding who killed David Locey.

One of Locey's closest friends said this community has lost a good person.

Skip Sisson said, “We’re all going to miss him. My thoughts and prayers are with the family at this time with Cherie. They’re good people and they don’t deserve this.”

Sisson said the death comes as a huge shock to Locey's four children and wife, Cherie. He knew Locey for over twenty five years.

Sisson said, “It’s a very sad situation. We played golf together less than two weeks ago."

Abbs worked with Locey at the Chamber of Commerce and says he was very active in Sturgis.

Abbs said, “Dave is like a story of the American dream. He comes from very humble beginnings, and he made himself what he was.”

Abbs says Locey would give the shirt off his back to help people in Sturgis.

Abbs said, “I think of him as one of the most caring and empathetic people that I know.”

His service not only included the work he did at his accounting firm, but he was President of the Kiwanis club, the Chamber of Commerce, and on the board at a local community college to name a few.

Abbs said, “There are givers and takers in life and clearly Dave is one who gives people a second chance and a third chance.”

Locey’s humble attitude and willingness to help others is why Abbs said she’s shocked that someone would kill him.

In his memory, many people changed their Facebook profile pictures to wreaths because Locey owns Timberly Tree Farm and was always in the Christmas spirit.

A vigil will be held in downtown Sturgis Saturday night at 9pm to remember Locey.