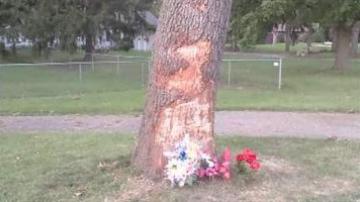 NILES, MI. --  The Niles community is mourning today after a 15-year-old girl stole a vehicle, lead police on a chase, wrecked into a tree and died.

Police say this happened Sunday.  They identified the young woman today as Jazmyne Rodriguez, a freshmen at Niles High School.

“I was making a cup of coffee and I heard this terrible noise.  It was the loudest noise I heard in my life,” said neighbor Maxine Scott.

That terrible noise was the sound of 15-year-old Jazmyne Rodriguez crashing into the tree in front of Maxine Scott’s home.

“I looked out the window and all I saw was the smoke and the dust and what was left and the cops were running in the street,” said Scott.

According to police, they were chasing the Niles High School freshmen, because she stole a truck on Sycamore Street.

The police chase ended on Yankee Street, when Rodriguez traveling 85 miles-per-hour veered into the left lane and crashed into a tree.

Scott said people have been coming to pay their respects since the accident.

“There were a lot of people here, said Scott. "She must have had a lot of friends.  They were bringing flowers.  It looked like they were having a memorial for her.”

Friends and classmates of Rodriguez at Niles High School said they cannot believe she is gone.

“I was just shocked.  I had just seen her on Friday and I was not expecting to come to school and hear that she had died,” said a classmate.

“She was just really sweet.  She was protective of her friends, like if you messed with her friends she would definitely stick up for them,” said a classmate.

And they say even though she was in the wrong, they will miss her all the same.

“I know she probably should not have been doing what she was, but she did not deserve to die,” said a classmate.