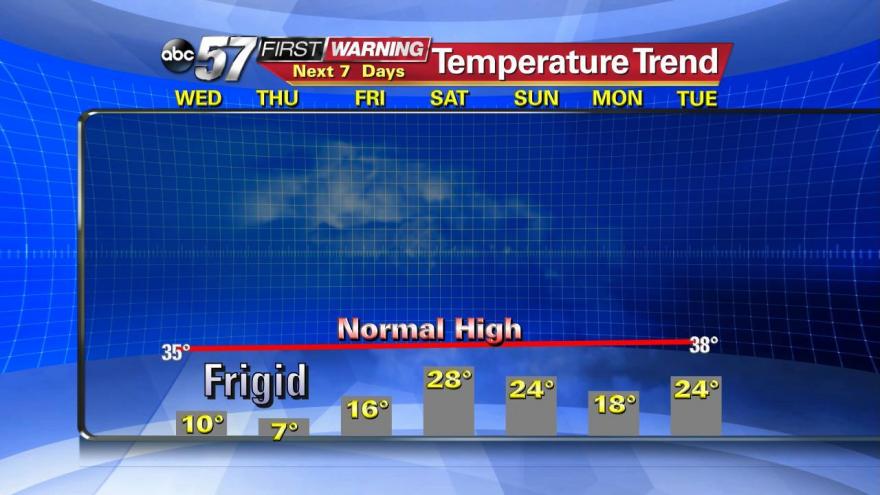 Wednesday 4:30 PM Update: Lake effect snow will continue to have an impact through most of Berrien, Cass and Elkhart counties. Winter Storm Warnings and Winter Weather Advisories continue until 7 PM Thursday. The lake effect band looks to park itself from Stevensville to Edwardsburg to Elkhart and Bristol. This is the most likely line for heavy snow and whiteout conditions. Areas outside this will still see light snow with blowing and drifting.

The wind will slowly calm into Thursday, but temperatures remain dangerously cold with highs just above zero Thursday and temperatures tanking near -10° by Friday morning.

Unnecessary travel is not advised and continue to use extreme caution and conditions can change rapidly. Have extra clothes and blankets in your vehicle. Remember even a minor auto issue can turn into a dangerous situation if you're stranded.

Tuesday 10:00 PM Update: Latest model runs are in, and confidence is stronger that parts of Berrien county will see 8" of snow by Thursday evening. Moved the highest shaded area into the 4"-8" range as now +8" is looking possible (Fig 3).

Tuesday 4:30 PM Update: A Winter Storm Watch has been posted for all of our Northern Indiana and Southwest Michigan counties for Wednesday morning through Thursday evening. Challenge with the forecast will be where a main band of lake effect snow sets-up. Models indicate this band could shift east to west and back again over this time period.

Greatest impact is expected along and north of US-20. Forecast update includes that entire area in the 2" to 4" range and expanded the 4" to 6" to include most of Berrien an Cass county ( Fig 3). Model indicate the potential for +8" if the band parks over one area, the St. Joe / Benton Harbor area could be that bulls-eye ( Fig 5).

Wind, frigid temperature and low visibility impacts remain unchanged. Use caution when driving over the next 48 hours, have an emergency kit because even a minor accident or break-down could turn into a dangerous situation with temperatures near or below zero.


The week ahead remains frigid, with little change in the weather pattern, the next round of lake effect snow hits Wednesday.

Highs this week will range 15 to 20 degrees blow normal, with highs struggling to reach the 20's by the weekend (Fig 1). Long range pattern, shows now sign of a significant warm-up. This could mean below freezing temperatures until the first week of March.

The next round of lake effect snow will impact Michiana Wednesday into Thursday. This wave does not look as harsh as Saturday's blizzard conditions, but similar localized impacts are possible.

Timing and Impact: After light system snow Tuesday evening, the lake effect snow will ramp-up starting early Wednesday morning. Models show with a more west to northwest wind, the band of lake effect snow will mostly impact southwest Michigan, and areas north of US-20, east of US-31 (Fig 2). For most of northern Indiana, the snow impact is minimal, less than 2 inches. The Elkhart, and Bristol areas could be the exception, with 2 to 4 inches likely north into Michigan (Fig 3).

The wind the caused blizzard conditions Saturday, will be less intense, over a shorter time-span,Wednesday (Fig 4), Wind gusts top-out in the 25 to 30 mph range. However localized whiteouts are still possible, use caution when traveling traveling.

Stay with the ABC-57 First Warning Neighborhood Weather Team as they track this frigid February weather.