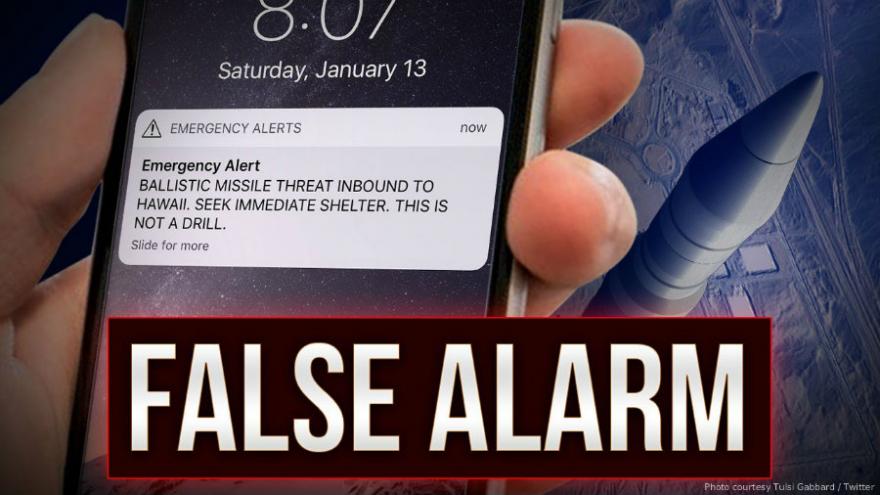 (CNN) -- Jocelyn Azbell had just woken up in her Maui hotel Saturday when she was hurried into the hotel's basement to take shelter from an incoming ballistic missile.

Minutes before, she'd received an ominous alert on her phone.

"BALLISTIC MISSILE THREAT INBOUND TO HAWAII. SEEK IMMEDIATE SHELTER. THIS IS NOT A DRILL."

Azbell, her boyfriend and hundreds of other hotel guests were "herded like cows" into the basement by staff. "People are crying and people obviously were super scared," she said.

For 20 minutes, Azbell said, they waited. Finally, they were told that the alert was a false alarm, and they were free to resume their day. Azbell said she was "super relieved."

"Hawaii is beautiful," she told CNN. "But it's not where I want to die."

It was a similar story for other Hawaiian residents and tourists who CNN spoke to Saturday. They described an island paradise turned upside down as people crawled under tables in cafes, were ushered into military hangars and huddled around televisions to watch the news for the latest developments.

If a missile were launched by North Korea toward Hawaii, the 1.4 million residents of the islands would have only about 20 minutes' notice before it hit. The state's emergency management agency has begun testing the state's nuclear warning siren system. Hawaiians have been told their best plan of action is to remain inside and shelter in placeuntil it's safe to leave.

But many on the islands aren't residents, but tourists. They're visiting and have had no experience preparing for a ballistic missile attack.

Some residents and visitors CNN spoke to said the escalating tensions between the United States and North Korea -- and the war of words between the two leaders -- lent the threat additional credibility in their minds.

They said they were "terrified."

'A day that just changed'

Ruth Goldbaum was on the island of Oahu with her family, visiting her son who serves in the US Navy. They were about to go boating in Kaneohe Bay, north of the island, when people began receiving the emergency alert.

"You can just imagine," she said, "it was a day that just changed from total recreation and chill to -- I wouldn't say panic, but alarm. Close to potential panic."

Goldbaum, 69, and the people around her -- a mix of military personnel and civilians -- were soon hurried into a nearby hangar, "not knowing if we'd be there for days, hours or minutes," she said.

"Some people were saying, 'Well, we're going to war. Others said, 'Let's see what's going on."

About 15 minutes into the ordeal, they started seeing the tweet from US Rep. Tulsi Gabbard in which she said it was a false alarm.

"Within those 15 minutes your emotions ran the gamut, from thinking we have to call people and tell them we're safe, tell them what's happening, saying our goodbyes," Goldbaum told CNN.

Goldbaum said "this escalation of words" between the United States and North Korea has put the country "in a very precarious and unstable situation and anything can happen," she said.

"Is this what the world is coming to that we have to have shelters?" she asked. "I think the only answer is diplomacy and have peace."

'People were crawling under tables'

Amy Pottinger's husband is a pilot for the US Air Force, stationed in Hawaii. They and their two children have lived on a military base there for about a year and a half.

He was in a cafe on base when phones started going off around him, Pottinger said. As he was leaving, he saw people taking cover.

"People were crawling under tables and hiding," she said, "and going into buildings that looked more sturdy."

Within about five minutes they had a "good suspicion" that the threat wasn't real, Pottinger said.

When asked whether she believed the tensions between the United States and North Korea gave the threat of a ballistic missile attack additional credibility, Pottinger said, "Absolutely."

"I like to keep myself educated with what's going on in the news and that's pseudo-related to my husband's job," she told CNN. "So I follow that enough to view that as a very real threat. Obviously that only further validates fears that this could be legitimate."

Visitors 'wouldn't know where to go'

Kenyatta Hines serves in the US Navy and moved to Hawaii just three weeks ago to study to become a chaplain.

Hines told CNN's Ana Cabrera she was in the shower washing her hair when she got the alert.

"I jumped out of the shower to read the message," she said, "and tried to call my boyfriend who is actually stationed at Pearl Harbor."

At that moment, she said, her phone wasn't able to make a call, "which made the situation a lot more stressful."

Hines said she had no idea what her next step should be, so she rendezvoused with her neighbors, who have been in the area longer than she has.

"My neighbors and I tried to figure out if we were going to go by car or run to the nearest shelter," she said. Hines was "blessed," she said, that her neighbors were locals and knew exactly what to do.

"But," she added, "she did warn that this is the first time that this has happened." People who were just visiting Hawaii "wouldn't know where to go or what to do," Hines said.

Adnan Mesiwala is currently visiting Waikiki with his family to celebrate his father's 40th anniversary, he told CNN affiliate KHNL.

"This morning we were actually getting ready to go to the beach," he said. "I got a 2-month-old. Our family was together when we got the alarm. We were actually terrified."

The family was staying on the 36th floor of the Hyatt Regency in Waikiki. The hotel told its guests to stay indoors, Mesiwala said.

"It was a frantic morning," he told KHNL. "My wife was in tears and didn't know what to do."

His father, Kutub Mesiwala, had just arrived the night before.

"With the new political environment, you know, we really thought this is serious," Kutub Mesiwala said.