From Tipper to Trump, Eminem is no stranger to political polemics 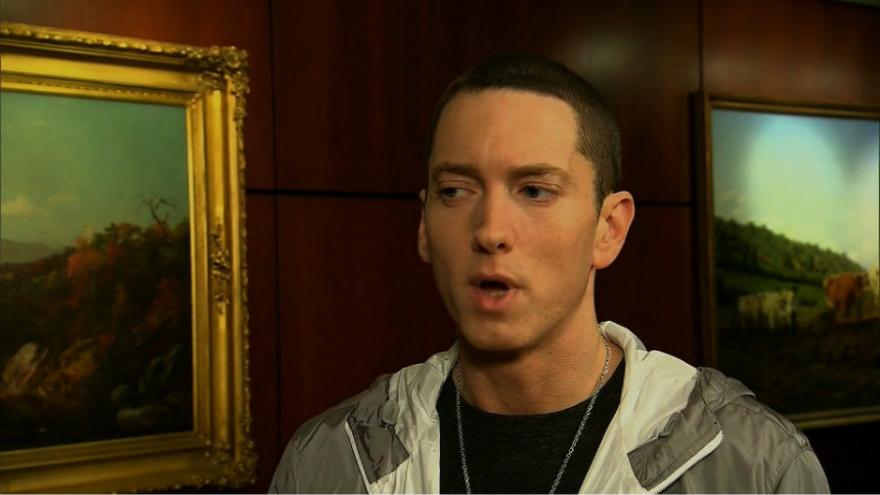 (CNN) -- Eminem's freestyle rap aggressively taking on President Donald Trump and his supporters at the BET Hip Hop Awards on Tuesday was his most vocal criticism yet of this president.

But not of any president.

Over the course of his Grammy-winning career, the combative rapper has used his music to start feuds with celebrities, artists, the media and plenty of politicians.

Eminem was a fierce critic of President George W. Bush, particularly in the blistering anti-Iraq War song "Mosh," and was once investigated by the Secret Service for rapping that he wished the President would die. His violent, aggressive, misogynistic and anti-gay lyrics even sparked hearings in Congress.

Never afraid to speak his mind or cause controversy, Eminem has variously slammed Bill and Hillary Clinton, Lynne Cheney, Tipper Gore and scores of other politicians he saw as hypocritical leaders.

Here's a look back at Eminem's most memorable dips into politics and political criticism.

Eminem, whose real name is Marshall Mathers, intensely criticized Bush's Iraq War policies in his protest song "Mosh" in October 2004. The song called on people to "rebel" and "raise hell" in protest and called out Bush personally.

The third verse featured further criticisms and suggested Bush fight the war himself.

"Let the President answer a higher anarchy. Strap him with an AK-47, let him go fight his own war, let him impress daddy that way. No more blood for oil, we got our own battles to fight on our own soil," he says.

He further tells his listeners to "look in his eyes, it's all lies. The stars and stripes have been swiped, washed out and wiped, and replaced with his own face."

In case the lyrics weren't clear, an accompanying video further expressed his political message. The video featured images of Bush as well as protesters in black sweatshirts storming the US Capitol.

At one point, an animated Eminem looks at a wall of newspaper articles with headlines such as "Bush Knew." Another headline reads "President Bush Signs Patriot Act," but with the word Patriot crossed out and replaced with the word "DEATH."

"[Bush] has been painted to be this hero, and he's got our troops over there dying for no reason," he said.

"We got young people over there dyin', kids in their teens, early twenties that should have futures ahead of them. And for what? It seems like a Vietnam 2. Bin Laden attacked us, and we attacked Saddam. Explain why that is. Give us some answers."

Eminem was once actually investigated by the Secret Service. A lyric in his song "We Are American" talks about the president, which was Bush at the time.

"F*** money. I don't rap for dead presidents. I'd rather see the President dead," he says.

That line led to the Secret Service investigation, which is routine when something that appears to threaten the president is brought to agents' attention.

"It would be saying too much to make too big a deal out of this," one Secret Service official told CNN at the time.

Eminem has often played up his fights with those in power as a point of pride.

In 2000, Congress held hearings on children's entertainment and violence, and the hearings particularly focused on the industry's glorification of Eminem's disturbing lyrics. In those hearings, Lynne Cheney, the wife of Vice President Dick Cheney, singled out Eminem as a "violent misogynist."

That led to a rebuttal in the song "White America" from 2002, in which Eminem proudly says he's "in trouble with the government" for his lyrics.

"I must have struck a chord with somebody up in the office, cause Congress keeps telling me I ain't causing nothing but problems. And now they're saying I'm in trouble with the government. I'm lovin' it, I shoveled s*** all my life, and now I'm dumping it on," he raps.

In the final section of the song, Eminem unloads on Cheney as well as Tipper Gore, the wife of Vice President Al Gore. Tipper Gore co-founded the Parents Music Resource Center known for its "Parental Advisory" stickers.

"(I am) the ringleader of this circus of worthless pawns sent to lead the march right up to the steps of Congress, and p**s on the lawns of the White House, to burn the flag and replace it with a Parental Advisory sticker, to spit liquor in the faces of this democracy of hypocrisy," he raps.

He continues in personal language.

Trump: 'Slim Shady is a winner'

Eminem's politics have sometimes trended more toward satire than anger. In an odd TV special back in 2004, Slim Shady led the "Shady National Convention," a fake political convention hosted by Carson Daly and Vanessa Lachey.

A suit-wearing Slim Shady accepted the nomination for the "Shady Party and Stuff." But before he did that, the rapper was introduced by none other than Donald Trump, then known more for his wealth than his political skills.

"I know a winner when I see one. And Donald Trump is telling you right now Slim Shady is a winner," he added. "He's got brains, he's got guts, and he's got Donald Trump's vote."

Eminem then took the stage and explained his reasons for running as a candidate, tongue firmly in cheek.

"Why me, you ask? Why Eminem? Well, let me tell you why if you would shut up for one second. Democrats and Republicans alike, and that other guy, they had conventions and they looked cooler than this one, but so what? So what, I say to them.

"What am I running for, you ask? I don't run from anything," he said. "That's the thing. I tackle the issues head on."

In his song "Role Model" on The Slim Shady LP in 1999, Eminem raps about then-President Bill Clinton and First Lady Hillary Clinton.

"So if I said I never did drugs, that would mean I lie and get f***ed more than the President does," he says.

Eminem, who has often been criticized for violent, misogynistic and anti-gay language, then attacks Hillary Clinton.

"Hilary Clinton tried to slap me and call me a pervert. I ripped her f***ing tonsils out and fed her sherbet -- b****," he raps.