Fundraiser being held for 4-year-old with cancer 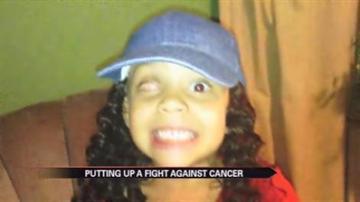 A Mishawaka girl’s family is drowning in debt because the insurance company dropped her after she was diagnosed with cancer. A benefit is scheduled to help the family pay the medical bills.

"It's just not a good feeling to know whether you're going to wake up the next day, to see whether your baby is still going to be with you or not,” said Shayla Sink, Samaya’s mom.

Bad news seemed to come out of nowhere for Shayla Sink and her family.

Her four-year-old daughter, Samaya, was diagnosed with retinoblastoma or eye cancer, this August.

"Within three weeks, it went from wandering to like nothing there,” said Shayla.

She thought Samaya had a lazy eye, but a CT-scan proved otherwise.

The Sinks have health insurance, but when the insurance company learned of Samaya's condition, they dropped her.

According to Shayla, Medicaid isn't much more help. Shayla says she has to fight to get help for her daughter's weekly treatments.

"It makes me sick to my stomach. She's a baby, she's not a grown person saying, 'Oh, my back hurts, I can't work, I need disability.' She's a baby, she can't fake any of this,” said Shayla.

At her wit's end, drowning in thousands of dollars of debt, she's now hoping for support from the community.

An upcoming benefit at the American Legion in Osceola will raise money for their medical expenses.

"Money goes super fast, so whatever does come in is not going to be there forever, but that would be nice,” said Shayla.

The benefit is January 12th at 4 p.m. at the Osceola American Legion. Tickets are $5 per person.