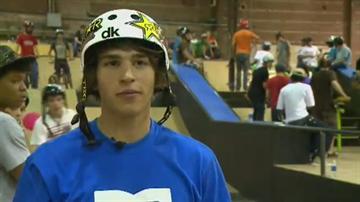 SOUTH BEND, Ind. -- BMX pro Brett Banasiewicz is still recovering  from a brain injury, after he took a nasty fall a couple of weeks ago. Right now the 17-year-old is in a Virginia Hospital and he hasn't woken up yet. Now hospital bills are really starting to add up for the family- that's why fundraising efforts have already started!

Lisa Banasiewicz Brett's Mother is unsure how much money they will have to pay out of pocket at this point but she did tell ABC 57 News that many of the specialists that have treated Brett are considered to be out of network on Brett's Father's Corba insurance plan. In many of the situations the plan only cover 80% with a large deductible that you first have to pay.

Six years ago Lisa & Bill Banasiewic's oldest son Bryce had a head injury after he crashed on a motorcross type bike and the couple had to pay $40,000 out of pocket in medical bills for his hospital stay and recovery. Bryce now 23 says friends of his family have started selling green and orange ribbons for as little as a two dollar donation that will go towards offsetting the hospital and/or the rehabilitation cost.

Bryce said, "it's hard for me to think of him in this state because he has been riding at the level he has been riding at for so long."  He wants to fly to Virginia to be at his brother's bedside but it's just not feasible right now because of the cost. Plus he started his fall classes at IUSB two weeks ago. "I'm studding radiology at IUSB because I've have CAT Scans, MRIs, CT Scans. I was riding on a dirt bike, I was riding in Kingsbury LaPorte and crashed on a step up and had to get airlifted to the hospital."

Bryce was in a coma for three days. His brother Brett was injured almost two weeks ago and he has yet to fully wake up . "I know what he is going through kind of, I mean I don't know because I don't remember, but I have been there done that." Looking back at pictures his parents took of him while he was in the hospital and rehab reminds Bryce of the path his brother will likely walk as he too recovers one day.

"I remember I had to learn how to re-walk because I seen pictures on facebook of me in a walker. It has been six years since my accident because I crashed July 4th, 2006 so I'd say about four years or so I started feeling back to normal," he said.  It scares him he says of what Brett may have to face. Bryce said, "He hasn't been really conscious in the last 11 to 12 days and I was in a coma for like three days. The Doctors said with my injury age was on my side, me crashing and having a head injury so early in my life, that my brain will repair itself just like I'm hoping Brett's does."