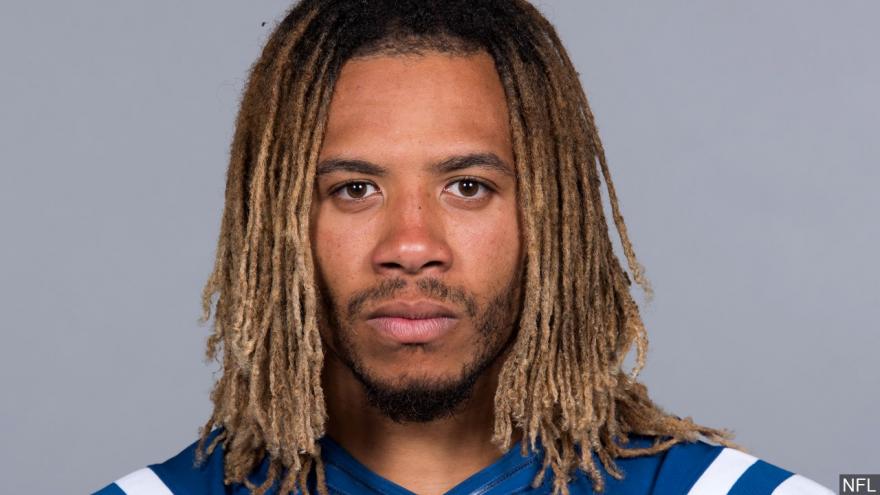 (CNN) -- NFL linebacker Edwin Jackson, struck and killed by a truck police said was driven by a twice-deported undocumented immigrant, was remembered Monday at the Atlanta church his family has attended for three generations.

The funeral at Big Bethel A.M.E. Church recalled Jackson's sports career and his giving back to the community and youth. The church is on iconic Auburn Avenue in Atlanta, where the Rev. Martin Luther King Jr. is interred at the King Center.

Jackson, 26, played for the Indianapolis Colts, and a horseshoe-shaped blue-and-white standing wreath was placed near the altar. Two helmets -- one for the Colts, the second from Jackson's college playing days at Georgia Southern University -- also were displayed. Jerseys going back to his high school team were in the back of the sanctuary.

The service was truly a celebration of the athlete's life, with inspirational music and remarks from former coaches and teammates. Among those performing was the church's mime ministry, one of several areas of service for Jackson at Big Bethel.

Jackson and his ride-share driver, Jeffrey Monroe, were struck and killed February 4 on an Indiana highway after they pulled to the side of the road. Colts owner Jim Irsay is paying for the funerals, a team spokesperson confirmed to CNN.

Jackson was a walk-on player at Georgia Southern before he joined the Colts in late 2015. Jackson started eight games in 2016 for the Colts, but did not play this past season due to an injury.

Jackson, one of 11 children, was a star football player at Westlake High School in Atlanta, where he lettered and served as team captain for three years. He also excelled in wrestling and was a state championship finalist, according to his obituary.

He created the Edwin Jackson 53 Foundation, which holds football clinics, fitness camps and after-school programs for disadvantaged youth, and supports student athletes who do not have scholarships. Jackson gave motivational speeches to include his "never giving up story" to a class at Harvard University, according to the foundation's website.

In Indiana, Manuel Orrego-Savala is being held by police on felony charges. Orrego-Savala was charged with two counts each of felony failure to remain at the scene of an accident and causing death when operating a motor vehicle with an alcohol concentration equivalent of .15 or more, according to court documents.

In addition to a 2005 DUI conviction, Orrego-Savala has several other criminal convictions and arrests in California and in Indiana, according to US Immigration and Customs Enforcement. He was deported in 2007 and 2009 and is a citizen of Guatemala, ICE said.

Jackson's death prompted President Donald Trump to tweet it was "disgraceful that a person illegally in our country" killed Jackson, a linebacker for the Indianapolis Colts. Trump called on Democrats to "get tough on the Border, and with illegal immigration, FAST!"

Those comments drew sharp criticism, including from the case's Indiana prosecutor.