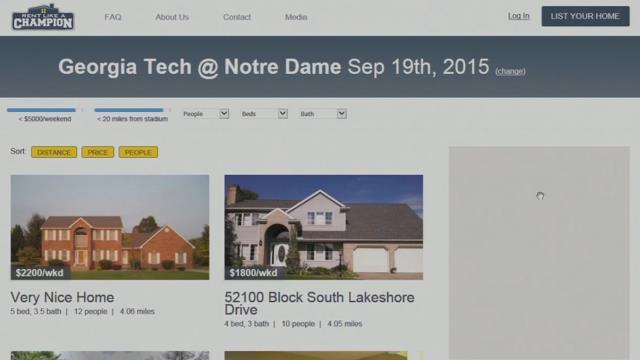 A new trend is taking over game weekends and many say it's a win-win for locals and fans from out of town: local homeowners are renting out their homes close to campus.

One of the most popular sites used to rent homes all over the country is Rent Like a Champion.

Started in South Bend, the founders were inspired by Notre Dame football.

From over 700 miles away in Canada, David Timmons was looking for his home away from home to see the Fighting Irish play in their first home game of the season.

“There was a lot of local feel to it, it was just very welcoming,” said Timmons.

A quick walk from campus, enough room for his large family to stay in one place, and all the comforts of home.

“You’re not going to get that at a hotel. It’s the future and I’m all for it,” said Timmons.

Over 300 other visiting families and friend groups also chose to book through the site for Notre Dame’s first home game.

Rent Like a Champion CEO Mike Doyle says this game is a win-win for both the guests and the home owners.

“It’s a great way for them to kind of avoid the craziness of game weekend and also make some good money in the process,” said Doyle.

The average home owner makes around $1,100 for a weekend.

As a Notre Dame alum, Doyle knows what he’s talking about. His colleagues got the idea for the site when they were living in South Bend attending Notre Dame in 2006.

“It started as renting out our own homes that we own,” said Doyle.

Their neighbors began to notice. But not because they were weary of the people staying next door.

“They wanted to get in on it. They asked us ‘can you help us rent out our homes?’ So we built the website so a lot of other people could list their homes on the site,” said Doyle.

In 2012 they went national, connecting college football fans to a rental in over 20 college towns across the country, giving fans a more personal way to experience their favorite team's hometown.

“You really are very ingrained in the community even though you’re only there for two or three days you feel like you’re really part of the community and right in the middle of the action,” said Doyle

Doyle and his team don’t plan on turning over business anytime soon.

“There are another 20 towns that we are planning to expand to. We’ve come a long way so far but there’s still a long way to go,” said Doyle.

But they haven’t forgotten where it all began.

“South Bend has been great, that’s definitely our biggest market. We did get our start at Notre Dame, that is our home base and we’re definitely appreciative of how receptive everyone there has been,” said Doyle.