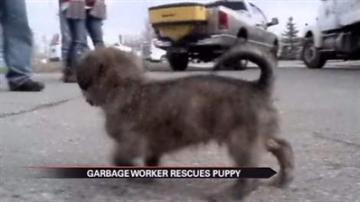 MUNCIE, Ind. -- We're finally hearing from the Indiana garbage worker who rescued a puppy from the trash.

A Muncie garbage man found the 6-week-old puppy, Garby, in a trash bag, shivering and covered in garbage.

"This ole' doggy here was hollering, 'Save me' I guess in dog talk," said Michael Upchurch, the garbage worker. "He was frozen stiff. I turned on the heat right here with the heat on full blast. Now, every bag I dump I'm like, 'Oh no, what's in that one?'"

The garbage worker went on to adopt the puppy. The original owner told the police that she thought the dog was dead.

She also told them she also threw away two other puppies.

The woman may now face neglect and animal cruelty charges.