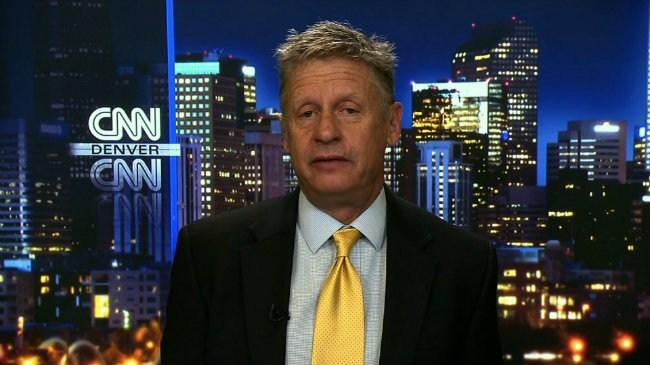 WASHINGTON (CNN) -- Libertarian Candidate Gary Johnson said Tuesday that he can not name a foreign leader he admires because he's "skeptical" about all politicians.

"I'm a real skeptic, so I point out an elected leader, foreign leader that I admire and all of a sudden I have to defend them against things that I'm not even aware of," he told CNN's Alisyn Camerota on "New Day." "So in that context, Alisyn, look, if that's a disqualifier to run for president, so be it."

The former New Mexico governor said he struggled to tell MSNBC's Chris Matthews last week the name of a foreign leader he respects because he's met "a lot of empty suits" in politics that he previously placed on pedestals.

Johnson, who was previously criticized for appearing unaware of the Syrian city of Aleppo, said the leading presidential candidates need to be able to do more than name foreign leaders.

"But I guess because you can -- you can dot the I's and cross the T's on foreign leaders and geographic locations, that now somehow you're qualified to put us in that situation? Hey, if that ends up to be the case, so be it. I guess I wasn't meant to be president," he said.

Johnson said US leaders need to admit America's role in creating the conflict in the Middle East.

The Libertarian candidate attacked Republican candidate Donald Trump for allegedly losing nearly $1 billion according to a leaked tax return. CNN has been unable to independently verify the documents and Trump's campaign has not confirmed or denied the validity of the documents.

"You know, he's presented himself as this guy who's omnipotent when it comes to investments and clearly he's made money, he's lost money," Johnson said. "How about just admitting to be a human being? Well, he's never done that."

While Johnson is getting less than 10% of the voters in the most recent four-way national polls, he said if matched head-to-head against the candidates, he'd do much better.

"I would love to see a poll head-to-head, Johnson versus Clinton, Johnson versus Trump," he said. "I think that would really be revealing. I think I would be the President of the United States in that poll."

Johnson believes it is millennials who will help him do well this election cycle. "Among millennials right now, we're tied for the lead with Clinton," he said.

But Camerota showed the former governor that among likely voters under age 35 in a four-way race, Clinton gets 50% and Johnson gets 17%.

"So how is that tied with Clinton," she asked.

"Well, maybe I was looking at the wrong -- maybe I was looking at the wrong poll that you're citing right now, but a recent poll that I looked at yesterday that had me at 7%. I thought that's the one that you're talking about," he replied. "If I'm at 7% and you have a non-applicable age group under the age of 50, you know, that's where I draw my votes. I'm leading among independents."

"Now like I say, I apologize if yours is a different poll than the one I looked at prior to coming on here," he added.