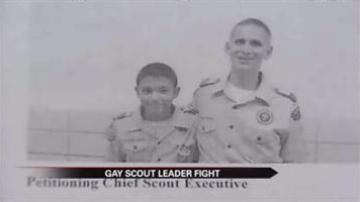 LOUISVILLE, Kent. -- A gay Boy Scout leader forced to resign is fighting back back.

In August, Greg Bourke was forced to quit after he revealed to a Kentucky based Boy Scout council that he was gay.

Bourke has now launched a campaign to change what he calls a discriminatory policy.]

He has launched a petition calling on the Kentucky Boy Scouts to reject the national organizations' policy against gay leaders.

"I would like to see the Lincoln Heritage Council of Lousiville, Kentucky do the same thing," Bourke said. "It would be very brave. So, I would challenge them to do that."

Bourke remains a Girl Scout leader for his daughter's troop because that organization has a different policy.