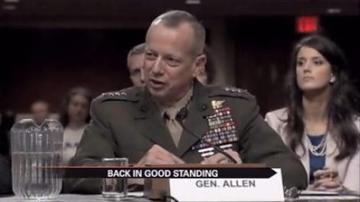 His name got linked to the Patraues sex scandal and his career almost went down with the former CIA directors' but now General John Allen's reputation is back in good standing with the Pentagon.

Officials there cleared him of any wrongdoing in Patraues' affair.  He was originally accused of having inappropriate conversations with one of the women involved in the tangled case.

"I can tell you that the President thinks very highly of General Allen and his service to his country," said Jay Carney, White House Press Secretary.

Allen's nomination to be the head of NATO in Europe is now back on track thanks to the Pentagon's clearance.