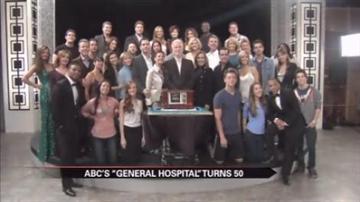 All week the cast and crew have acknowledged the legendary run.

Some of the actors you have recognized for decades but behind the scenes folks have stuck around for just as long.

"We're all much appreciated and we appreciate each other and work very hard together to try and make a good product," said Sandy Massone, TV engineer for General hospital.

The show’s executive producer says they have too many plans to fit into one month so you can expect some surprises for over the next several months.