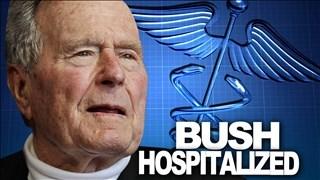 Former President George H.W. Bush remained at a Houston hospital for a third day in a row after experiencing shortness of breath earlier this week.

The former president, age 90, had "another terrific day," said his spokesman, Jim McGrath. His wife visited him in the hospital, along with his son Neil and daughter-in-law Maria Bush.

Bush was admitted Tuesday as a precaution.

Houston Methodist is the same hospital were Bush spent nearly two months for a bronchitis-related cough and other health issues before he was released in January 2013 after treatment.

Bush's most recent public appearance was in November at an event at Texas A&M University that he attended with his son, former President George W. Bush.

Bush began experiencing health problems in 1991 when, as president, he entered the hospital with an irregular heartbeat.

Doctors diagnosed him as having Graves Disease, a thyroid condition that, by coincidence, his wife also had.

Bush experienced a recurrence of the irregular heartbeat in February 2000, when he was attending a reception in Naples, Fla. He spent a night in the hospital, but smiled and joked with reporters the next day.

In November 2012, he was admitted to a Houston hospital for bronchitis and a chronic cough. He was expected to return home well before Christmas, but remained hospitalized after the holiday, with officials saying he had a high fever and had been placed on a liquids-only diet.

His family has said publicly the former president was no longer able to walk unassisted, a frustration for a man who enjoyed an active lifestyle of golf, fishing, jogging, and power walks on the beach near his summer home in Maine.