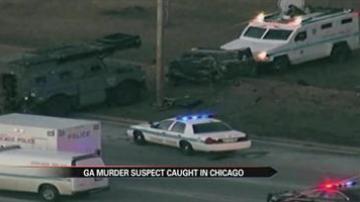 A man suspected of killing his wife in Atlanta, then running to Chicago was caught Sunday night after a stand-off that lasted 9 hours.

Forty-three-year-old Joseph Felton was wanted for questioning in his wife's murder when police spotted him near Chicago.

Police say Felton led them on a chase and rammed his car into others before crashing.

He then stayed inside his car for more than 8-hours until members of the SWAT team pulled him out.

"I guess that if he saw one of his sisters maybe he would come out. You know, I mean, look at the situation here. Look at all the armored tanks and stuff. I would probably stay in too, but if I saw a friendly face maybe I would be like 'Maybe it's gonna be okay," said Felton's sister Lastella Felton.

Police shut down busy Lake Shore Drive for drivers as well as joggers and walkers during the stand-off.