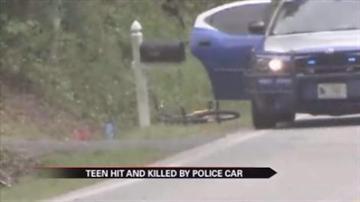 MCDONOUGH, Ga. -- A Georgia teen died at the hospital after he was struck by a police car.

On Saturday, the 14-year-old was riding his bike with friends when they were pulling out of a driveway.

The officer struck the teen and remained on the scene to help him.

"His bike didn't have no brakes, so he was trying to turn. So when the car was coming, he was coming too fast, so it hit him really hard," said Cortez Jackson, friend of victim.

The teen later died at the hospital.

The police officer is now on paid leave pending the investigation.