Get ready for more US women in combat 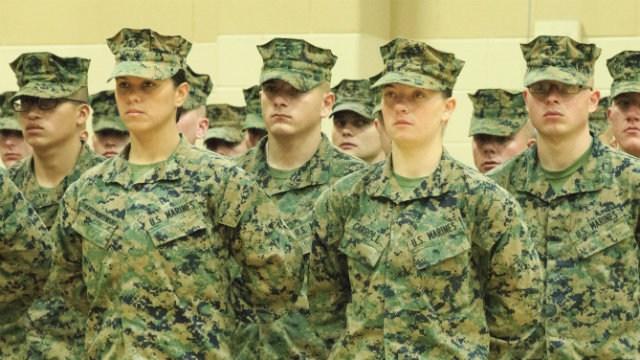 (CNN) -- More than a decade after she helped kill 27 insurgents who ambushed a supply convoy in Iraq, Sgt. Leigh Ann Hester still thinks about it almost daily.

Amid burning trucks, exploding grenades and the piercing sound of machine guns --- Hester and her comrades were outnumbered five to one in an intense firefight that would put her in the military history books.

When you experience a situation like that, the memories tend to stay with you.

In March of 2005, Hester's Kentucky National Guard military police squad of two women and eight men were escorting the convoy on a road southeast of Baghdad when about 50 insurgents attacked them with AK-47 rifles and rocket-propelled grenades.

Immediately Hester and squad leader Staff Sgt. Timothy Nein positioned their Humvee trucks between the convoy and the attackers. The guardsmen began firing back.

"I remember the bullets pinging off the ground and off the back of the truck, and some went by me," said Hester, who was 23 at the time.

Hester and Nein exited their Humvees and moved on foot toward a handful of insurgents who were using an irrigation trench as cover.

"We got in the trench and there was one of the insurgents with an A-K who was firing at us. Because of what little cover we had, we had to use hand grenades to lob over into their position," she said.

"The only thing on our minds was: 'there's three more guys. We're the only ones that can kill them,'" she remembered. "In order to protect ourselves and our fellow squad mates, we had to do what we had to do."

By the time the shooting stopped, Hester had killed at least three enemy combatants. A wounded US soldier was safely transported to a nearby field hospital. All told, everyone in the convoy and Hester's unit survived.

Eight soldiers were decorated for their roles during the attack. Three of them were awarded the prestigious Silver Star --- the Army's third-highest decoration for valor. They included Nein, a medic --- Spec. Jason Mike --- and Hester, the first female soldier ever to receive the Silver Star for direct combat action.

Officially, since 1994, the Pentagon was following its so-called "combat exclusion policy," which stated: "Service members are eligible to be assigned to all positions for which they are qualified, except that women shall be excluded from assignment to units below the brigade level whose primary mission is to engage in direct combat on the ground."

Despite that policy, Hester and thousands of other female service members served in combat support roles that often put them in harm's way.

Now, America is marking its first Veterans Day under a new policy that opens all military jobs up to women --- including ground combat forces and elite units like the Army Rangers and Navy SEALs.

Since January 1, women have been allowed to apply for these 220,000 positions. But so far, relatively few women have been trained or deployed for those jobs. Military leaders say applications for combat positions are being considered and training is being assessed.

Defense Secretary Ash Carter directed the entire military to open the new jobs to women after a three-year study by leaders across the Army, Navy, Air Force, Marine Corps and Special Operations Command.

"Fully integrating women into all military positions will make the US armed forces better and stronger," Carter said last December when he announced his decision. "But there will be problems to fix and challenges to overcome."

As a result, Griest is expected to become the Army's first female infantry officer. In April the Army approved 22 additional women as officers in armor and infantry units, which were once open only to men.

"I do hope that with our performance in Ranger school we've been able to inform that decision as to what they can expect from women in the military --- that we can handle things physically and mentally on the same level as men and that we can deal with the same stresses in training that the men can," Griest told reporters after passing her Ranger training.

Overall the shift is moving slowly, as the entire US military is still gearing up. Throughout the branches, dozens of women have applied --- and are being considered --- for the newly opened career paths in infantry, armor, reconnaissance and special operations.

Women have been fighting for a while

For more than 150 years American women have been struggling to fight alongside men, according to the US military. Here's a brief timeline:

Civil War: More than 400 women --- Union and Confederate --- fought by disguising themselves as men

1983: Women are allowed to pilot helicopters in an armed conflict

Recently in Iraq and Afghanistan, women --- like Hester --- have been serving with military police patrol units or as communications specialists directly engaging with civilians.

According to the military, female US military casualties in the global war on terror as of October 2015 include:

Some military jobs newly available to women will require them to perform extreme physical tasks and execute special fighting tactics --- all under stressful conditions. Now, women can serve as "the tip of the spear" in elite military, anti-terrorist operations --- if they pass the training.

Training for the Navy's Basic Underwater Demolition/SEAL (BUD/S) program is widely acknowledged as among the world's toughest.

So far, the Navy says there are no women in the pipeline to be history's first-ever female SEAL. But it's only a matter of time, experts say.

Of course, when it does happen, don't expect it to play out like Hollywood envisioned it in 1997, when Demi Moore starred in "G.I. Jane." But make no mistake, the first woman tapped for SEAL training will have a tougher path than her male counterparts.

An average of about 75% of trainees fail to complete the BUD/S course, due mostly to candidates who drop out, according to a recent Navy study.

The Armed Services Vocational Aptitude Battery (ASVAB) --- a standardized series of multiple-choice tests used for selection purposes --- was flagged in the study. ASVAB scores are used to determine whether candidates are qualified for SEAL training.

"Females had lower scores on the ASVAB composite scores and on the performance indicators compared with males, which suggested that use of the ASVAB for selection purposes may create a barrier for females," the report said.

Experts say the first female SEAL candidate will not only have to suffer through SEAL training. She'll also likely have to endure a great deal of pressure to succeed, because the world will be watching.

"It would be hard to be the first one," Hester said. "I think once one or two volunteers can go after it, then more will follow."

She pointed out that there are male soldiers who wouldn't be cut out for infantry or specialized operations. "For women that are cut out for it, more power to them," she said. "If they're able to do it, they should be able to (enter training)."

Growing up in Kentucky, Hester said she knew early on that a military or law enforcement career would be right for her. "I always looked up to women in uniform --- police officers and soldiers," she said. "So I knew it was right down my alley."

"Going to war and having to go to battle was always in the back of my head." In 2001, she joined the National Guard and finished Army basic training just a few months after the 9/11 attacks. Hester knew it was very possible she'd see action.

These days she serves as a weekend warrior with the Tennessee National Guard while working full time as a master patrol officer for the Franklin Police Department near Nashville. In addition to street patrol and SWAT team duties, the department relies on Hester to train new recruits.

Many other female combat veterans share Hester's sense of duty and sacrifice.

In 2006, while serving with the Marines' 9th Communications Battalion, Richardson and her fellow Marines came under attack while setting up a gun position and communications antennas on the roof of an abandoned school in Fallujah.

"AK-47 rounds were impacting the water reservoir just inches away from our maneuver positions, and mortar rounds were being lobbed around the school yard," she told CNN via email. "It never occurred to us to retreat. It was imperative for our communications to be emplaced for our commander to have a visual on the battlefield."

Even before her first combat deployment, Richardson made her initial commitment to serving her country in any capacity, including accepting risks that come with the job.

" ... we were there to put country before self, and to sacrifice comfort for the betterment of our Corps, the Nation, and the Iraqi people we protected from adversaries," Richardson wrote.

'Men can do certain things better'

Not everyone in the military community has been supportive of opening up all military jobs to women.

"But if you look at the population demographics, most women --- and you're talking thousands --- cannot properly carry a 230-pound soldier with rucksack and combat vest on, off of the battle field to save his life."

Other objections came from the Marines, which asked the Pentagon to continue to ban women from about 49,000 positions, including reconnaissance and infantry roles.

An internal survey of about 54,000 Marines reported by the Washington Post offered some insight into what the Marines are worried about.

The survey was done by the think tank CNA in 2012, but the results were not released to the public. The Post obtained the report through a Freedom of Information Act request.

Many men who took the survey expressed concerns about false reports of sexual assault or about intimate relationships in the same combat unit. Female Marines who responded to the survey cited increased risk for sexual assault and that enemy forces would target women as potential POWs.

So far, no women have been deployed to serve combat roles in Marine infantry units.

What do other countries do?

At least 16 nations, including Israel, allow women in combat roles.

After many decades, Israel Defense Forces reopened direct combat positions to women in 2000. Now its military consists of about a third women, with about 3% serving as combat soldiers.

Israel has created a combat battalion called Caracal that's made up of about 66% women and guards the nation's border with Egypt.

"There were concerns I heard on occasion. They were worried that we would lower standards," Foley said. "That did not end up being the case. The leadership made it absolutely clear from the beginning that the standards for these jobs would be based on the requirement for the job."

Foley said there are 17 female applicants for Air Force pararescue and combat rescue officer training now in the entire Air Force Combat Command. Pararescuers are tasked with the dangerous job of going into hostile areas and rescuing  aircrews whose planes have gone down.

There will be no quotas.

"We'll keep an eye on the numbers --- but I can tell you there's no plan for us where we've got to chase numbers to make this a successful program," Foley said. Success --- he said --- will be defined by results on the battlefield.

American attitudes have evolved quite a lot since the days when women were banned from the front lines. Foley credits the shift to changing generational and military culture.

"We as a service, and the military, have gotten a lot better at dealing with change," he said.

Is the debate finally over?

Now that the entire US military is finally open to women, Hester hopes it will move America closer to ending this long debate.

The argument might be settled at some point if standards remain the same for men and women, she said.

"But there's always going to be animosity," she warned. "There's still people out there that don't feel that women should be in the Army, period, much less in a combat or combat support role."

Nonetheless, she said, progress is always a good thing.