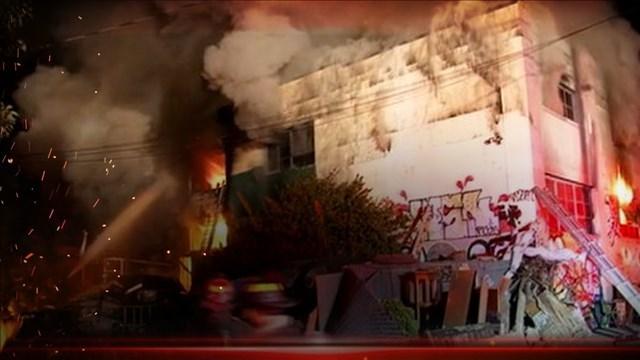 (CNN) -- A slew of people, including the building owner and employees of various city and county departments, knew Oakland's Ghost Ship warehouse posed dangers long before a deadly blaze killed 36 people earlier this month, the parents of two partygoers who perished have alleged in lawsuits.

Among those who should've been aware of the hazards are members of the Oakland Fire Department who "attended and held a music event" there prior to the deadly fire, the lawsuits say without elaborating. They also note that the nearest fire station is about a block away.

"We have filed this lawsuit against the owners of the building, ... against those who were involved with the event, the promoters and the person who was putting on the show. And we have also filed against the person who was like the manager," said San Francisco attorney Mary Alexander, who is representing the families of Griffin Madden and Michela Gregory.

The Maddens and Gregorys filed lawsuits against several individuals associated with the Ghost Ship, while filing claims against Oakland and Alameda County. The California Tort Claims Act requires that individuals give government entities the chance to settle claims before including them in lawsuits.

Lawsuit: They suffered before death

Madden and Gregory tried to escape the Ghost Ship once the deadly fire broke out and both knew they were "likely going to perish" because they could not escape the blaze, the lawsuits say.

Both were alive, fearing for their safety, when they were overcome by fire and smoke, killing them. Neither died instantaneously, according to the suit. Rather, both were "injured and suffered from the injuries caused by the fire and smoke for many minutes before dying," it says.

"Michela's body was found inside the Ghost Ship with her boyfriend of five years, Alex Vega. Alex's arms were wrapped around Michela, trying to protect her from the fire," one of the lawsuits says.

Madden's body was also found inside the Ghost Ship, according to his family's lawsuit.

"As a result of the horrific, gross negligence of the defendants in this case, these two young people have lost their lives," Alexander said.

In addition to building owner Chor Nar Siu Ng and landlords Derick Almena and Micah Allison, the lawsuit also targets a promoter, a California-based music label, a Madison, Wisconsin-based musician and two landlords of nearby properties who "provided utilities and services to the Ghost Ship, including a supply of electricity from their premises and a restroom on their premises for use by patrons and invitees during music and other events."

No criminal charges have been filed in connection with the fire, though Alameda County District Attorney Nancy O'Malley has said her office will make a decision on whether to file charges once the investigation is compete.

Almena has apologized to the victims' families and vehemently defended himself, saying he would never have intentionally endangered any of his tenants.

"I'm only here to say one thing: that I am incredibly sorry," he told "Today" in an interview after the fire.

Were city, county aware of hazards?

City records indicated that, before the fire, Oakland received complaints about the Ghost Ship and an adjacent lot, including reports of a "ton of garbage piling up on the property" and an "illegal interior building structure" at the warehouse.

And though the owner was cited in November for hazardous trash and debris surrounding the building, Darin Ranelletti, Oakland's interim director of planning and building, said the warehouse had not been inspected in 30 years.

"That means we had no applications for permits in the last 30 years, and there were no violations that were submitted for interior work within the main building attributed to that street address," he explained.

Among the lawsuits' allegations:

• "The interior of the approximately 10,000-square-foot Ghost Ship was a death trap, which contained a maze of makeshift rooms, alcoves and partitions. It was cluttered with carvings, mannequins, paintings, artwork, scraps of wood, pianos, furniture, tapestries and at least one recreational vehicle trailer, which were kindling for the fire."

• There was no safe means of accessing the second floor, where the December 2 party was held. (Jill Snyder, special agent in charge with the Bureau of Alcohol, Tobacco, Firearms and Explosives' San Francisco field division, has previously said the fire likely started on the first floor, trapping partygoers on the second floor. Most of the victims were found on what remained of the second floor after the roof collapsed onto it, she said.)

• Almena and Allison had been renting "makeshift rooms and alcoves" for $300 to $600 per month for three years. At the time of the blaze, they were renting to 24 people and entities, and on the night of the party, they and the party's promoters charged a $10-$15 cover charge to enter the show.

• The city and county were aware Almena and Allison "were illegally living in the dangerous and unsafe Ghost Ship with their three minor children" and failed to follow "mandatory child abuse and neglect reporting requirements."

• The artists, musicians and tattooists who frequented the Ghost Ship and resided there overloaded the electrical system, and "there were often sparks from the electrical system that smelled and circuit breakers blew out often." Flammable industrial and art supplies and propane tanks for camping stoves also posed fire hazards.

• There had been fires before the deadly December 2 blaze, including a refrigerator fire the day before that residents had to extinguish. Tenants had warned Almena the Ghost Ship was a "death trap" and told him to buy extinguishers.

• Ghost Ship was known to host and charge entrance fees for public events inside, outside and on the rooftop. There had been numerous complaints of noise, illegal dwelling and debris to the Oakland Police Department and the Planning & Building Department. The lawsuit includes excerpts from two November complaints and three excerpts from 2014 complaints. (Ranelletti, the city's interim director of planning and building, has previously said the warehouse was to be used only as a commercial space and had not received any residential or public assembly permits. A November 13 complaint about "hazardous" trash at the site reported, "the yard became a trash collection site and the main building was remodeled for residential.")

• Except for a reference to the county responding to "vector issues," the lawsuit does not specify why the Vector Control Services District is named, but the district's website states the agency's function is preventing "vector-borne diseases, injury, and discomfort to the residents of the District by controlling insects, rodents, and other vectors and eliminating causal environmental conditions through education, and integrated pest management practices."