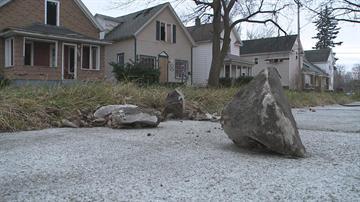 SOUTH BEND, Ind. – Dozens of homes along Scott and Taylor Streets off of Indiana Avenue have sat vacant and wide open for months after being bought by the city of South Bend to make way for development of Ignition Park, a high-tech business incubator designed to help stimulate South Bend's economy.  People who live nearby say the homes are a safety hazard that’s ruining the image of their neighborhood.

“It’s like watching your whole life go downhill because I grew up here,” described Mary Ellen Douglas, who has lived on Indiana Avenue for 68-years.  “We’ve got a lot of homes that have holes in them, the doors are open, we’ve had people that have been going in there and stripping stuff out of them, you see them going down the alleys with stuff out of the houses.”

Douglas says the neighborhood feels like a “ghost town.”  Most, if not all, of the windows on the empty houses are smashed, there are huge holes in the roofs and sides of some of the homes and there’s evidence that people have been sleeping in the empty building.  She’s worried neighborhood children could get hurt playing in the houses and that they are a fire hazard.

“If anyone throws a match they’re going to go up in flames,” she explained.  “One match would probably take the whole block out.”

Over the summer city crews demolished some of the homes, but Douglas said the work stopped and the homes have been left to fall apart.  She said she was sad to see people move out of the homes and it will be heartbreaking to see them destroyed, but after months of watching the homes be ripped apart by scrappers and posing health and safety risks she wants them all torn down as soon as possible.

“If they bought them all up, get them all down,” she exclaimed.  “They should’ve been torn down when they tore the others down."

She explained that the city should be fully aware of the condition of the houses because the South Bend Fire Department uses some of the homes for training.  She said that she and her husband have even considered moving from their home because they feel the entire area is being neglected.

ABC57 was unable to contact anyone with the city of South Bend to try and find out when the homes would be demolished and if the city would at least board up the homes as a safety precaution.