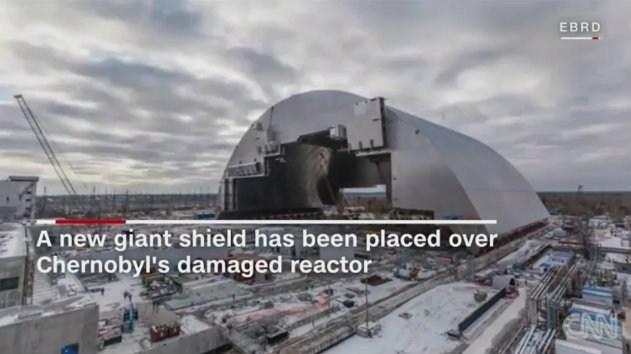 (CNN) -- It can withstand a tornado and is so massive it could house Paris' famed Notre-Dame Cathedral.

A giant shield designed to protect the nuclear reactor damaged 30 years ago at Chernobyl has reached its final resting place, completing an unprecedented engineering feat.

Known as the New Safe Confinement (NSC), the shield will seal off an aging shelter -- built hastily after the disaster occurred in 1986 in what is now northern Ukraine -- that is leaking radioactive material.

A first for modern engineering, the Chernobyl shield is the largest moveable, land-based structure ever built, according the European Bank for Reconstruction and Development (EBRD), which manages funding for the international project.

The arch-shaped steel structure was assembled nearby and moved more than 1,000 feet into position with the help of a special skidding system of hydraulic jacks that pushed the mammoth shield one stroke at a time.

"Many people had doubts and didn't believe... However, I congratulate you, dear friends. Yes, we did it," said Ukrainian President Petro Poroshenko during a ceremony at Chernobyl commemorating the event.

The Chernobyl disaster, in what was then the Soviet Union, remains the worst nuclear power plant accident in history.

A series of errors and technical malfunctions led to the meltdown of No. the 4 Reactor, which exploded on April 26, 1986, releasing radioactive plumes into the air.

More than 100,000 residents were evacuated from the affected area and a 19-mile exclusion zone is still in place. Birth defects and cancer rates among residents in the area exposed to radiation are still high.

Construction of the NSC is expected to be finished in late 2017 when the shield is fully sealed.

The project cost some $1.7 billion and has been funded by contributions from more than 40 countries and organizations through the Chernobyl Shelter Fund -- the largest international collaboration on nuclear safety to date, according to EBRD.

A consortium of two French construction firms, called Novarka, started building the shield in 2010. Its project director, Nicolas Caille, said the NSC will ensure "optimal safety conditions" for the Ukrainian people over the next century, calling the endeavor a "one-of-a-kind technological challenge."

Rising 360 feet into the air with a span of 850 feet and length of 540 feet, the shield is tall enough to cover the Statue of Liberty and longer than two Boeing 777 jets placed end to end.

It weighs over 36,000 tons, including the equipment inside, and has a lifespan of over 100 years, according to EBRD. The structure has a sophisticated ventilation system that eliminates the risk of corrosion.

"This is our contribution to the future, in line with our responsibility for those who will come after us," said Igor Gramotkin, Director-General of the Chernobyl Nuclear Power Plant.

The equipment inside the shield will be connected electronically to a control room outside, allowing all operations inside the dome to be managed remotely. The goal is to eventually safely dismantle the damaged structure underneath.