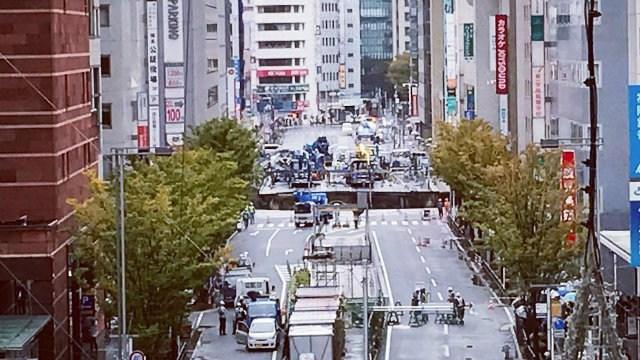 (CNN) -- A gigantic sinkhole has opened in the southwestern Japanese city of Fukuoka, swallowing huge sections of road near underground work to extend a subway tunnel.

A 7-to 8-meter-wide hole was first reported early Tuesday, according to Motohisa Oda, a crisis management officer from the city of Fukuoka.

Nearby residents were evacuated, and five major roads cordoned off in Hakata ward in Fukuoka's business district.

The gaping hole -- which started off as two smaller ones before merging into the larger cavity -- appeared 300 meters from the JR Hakata railway station.

The sinkhole is now a whopping 27 meters wide, 30 meters long and 15 meters deep.

It is filled with water that seeped in from sewage pipes destroyed by collapsing sections of road.

City officials were working nearby to extend the subway from JR Hakata station to the city center along a 1.4-kilometer route.

Oda told CNN that the underground construction work may have triggered the hole.

The sinkhole has cut power to roughly 170 households across the city of Fukuoka. Saibu, a gas supplier, is checking for any gas leaks in the area.

While authorities investigate what exactly caused the hole, a few social media users in Japan have been joking about the kind of monsters that might emerge.

"Uh oh, this thing might emerge in front of Hakata station," tweeted @_zukkyun, linking to a cartoon monster with a screwdriver for a nose.