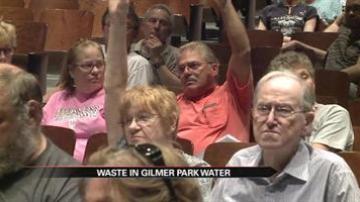 SOUTH BEND, Ind. -- What's in the water in Gilmer Park? That's a question residents have been asking for months. Now the health department is saying the water is unsafe.

“I couldn’t think of a gentler way to say this, but the cause of this is human waste,” said Dr. Thomas Felger, a St Joseph County health officer.

A study by the St. Joseph County Health Department says they found particles of human waste in the water.

“I’m trying to figure out why after all of these years living out in Gilmer Park that all of a sudden the water is bad," said Gilmer Park resident Deborah Cooper.

Cooper has lived in Gilmer Park for almost 60 years and says her water is fine. She thinks this is all a ploy from the city.

“I believe they’re just trying to hook us up so they can raise taxes and annex us into the city," said Cooper.

Many people at the meeting agreed with Cooper.

Dr. Fleger was interrupted multiple times with constant questions from the crowd.

The St. Joseph County Health Department says, they tested over 400 wells in Gilmer Park and 61-percent of the nitrate levels found are dangerous to the health of anyone who drinks it, according to EPA standards.

Cooper doesn't believe any of it and another member of the crowd, Stephen Reiter, is on the fence.

“There’s a possibility that’s true. It depends on people’s wells," says Reiter. “Personally I have mine pumped every 3 years and I also had my water tested recently with a laboratory company. My nitrate level was up but it was still within the safe parameters.”

Ultimately, it's the price of switching water sources that's keeping this crowd united to keep drinking whatever comes out of their tap.

“There’s a lot of people here unsatisfied with what they’re trying to do,” says Robert Cripe who lives in Gilmer Park. “We have other options.”

If you have any questions about your water, click this link to share your thoughts with health officials.