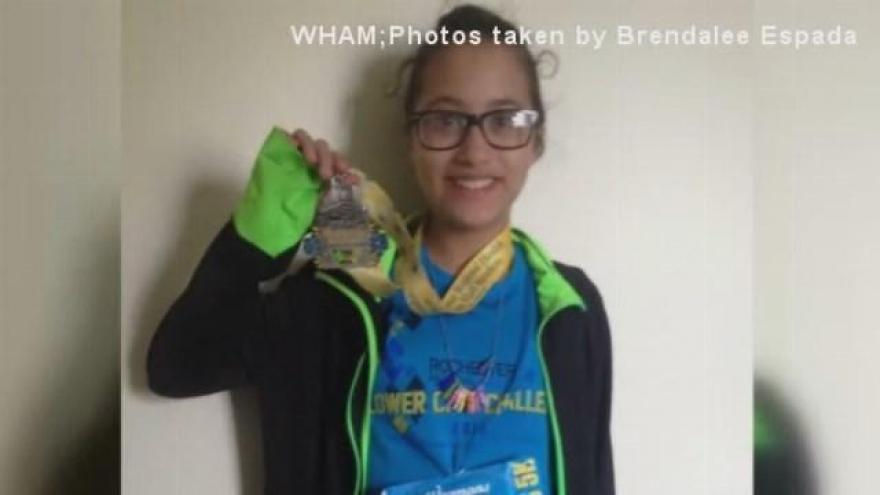 Thousands of people do it every week. Dogs have done it. And a 12-year-old girl just completed a half marathon by accident.

LeeAdianez Rodriguez-Espada, 12, was running late to the Wegmans Family 5k Sunday in Rochester, New York. To save time, her mom dropped her near the starting line before parking the car. LeeAdianez, who goes by Lee, rushed to the starting line only to realize the race had already began.

She was told to just start running and quickly fell into pace with the others.

Meanwhile her mom found a spot at the finish line, expecting to congratulate her daughter within the hour.

Lee, focused on putting one foot in front of the other, didn't realize until mile 4 that the finish line was nowhere in sight. Turning to another runner, she asked how much further.

"And that's when it struck me I was in the half marathon instead of the 5k," Rodriguez-Espada told CNN affiliate WHAM. Instead of dropping out, she decided to keep running.

Realizing her daughter wasn't among the runners crossing the 5k finish line, Brendalee Espada alerted race officials and the police. At first, authorities, were concerned.

"We didn't know where she was," race organizer Ellen Brenner-Boutillier told WHAM.

A police officer eventually found Lee on the course of the Flower City Half Marathon. The young runner said he knew her family was worried but she couldn't quit. She needed to finish the race. And as she finally crossed the finish line, after running 10 miles more than she had planned, her mother cried tears of joy.

"I see her with a medal and I thought, 'Oh my gosh, she ran the other one, like for real,'" Brendalee Espada said. "She decided to just keep running and not give up."

Five other 12-year-olds and one 7-year old also completed the half marathon, according to race results.

"I'm really proud," said Lee, whose next race is this weekend. Her mom said she plans to run that one also, to keep an eye on her daughter.