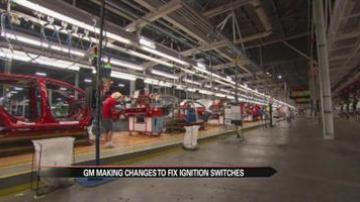 NEW YORK -- At the New York Auto Show, the CEO of General Motors was again in the spotlight as the world watched how the company is rebounding from the recent recalls.

Mary Barra says she is making changes company wide to make sure the problem that prompted the ignition switch recall never happens again.

More than a dozen deaths are blamed on the ignition switch flaws.

Last week, she suspended two engineers in charge of the recalled switches.

"There was a lot of attention, we agonized over that decision. But we felt it was right for the individuals, but they are on paid leave," said Barra.

General Motors recalled the cars in February for a problem with the ignition switch could cause the car to turn off while driving, disabling the airbag, anti-lock brakes and power steering.