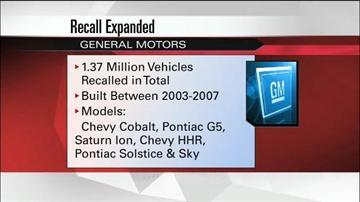 DETROIT — General Motors has expanded a recall that has been linked to several deaths.

GM says it is recalling an additional 1.37 million vehicles built between 2003 and 2007. Officials say 13 deaths have been attributed to a faulty ignition switch.