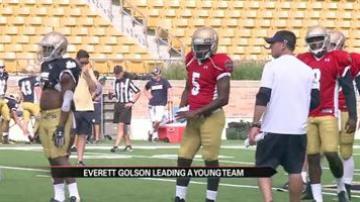 NOTRE DAME, Ind.-- Today marks twelve days until the Fighting Irish kick off in their first game against Rice, and Head Coach Brian Kelly is watching closely as some of his guys step up and stand out in leadership roles.

“I’m a natural leader, so of course I would love to embrace it,” Irish quarterback Everett Golson said Tuesday.

Quarterback Everett Golson is one of those guys. Just named the starting Q-B by Kelly a little more than two weeks before the season opener.

“Being quarterback here at a premier football school is exciting,” Golson said.

And despite Kelly mentioning a few late arrivals to team meetings in Golson's younger years, today Kelly is looking to his quarterback to lead a very young team.

“We don’t have as many guys as we did. All of those seniors are gone and I look up now and I’m the senior, so I have to be that leader for this team,” Golson said.

Golson, not shying away from his new role. This, after he sat out last season because he was suspended in 2013, for what he calls poor academic judgement.

“You have a lot of time to really self-evaluate yourself,” Golson said.

Golson says it was difficult being away from the field for so long, but looking back, the break brought perspective that he hopes will carry into this season.

And about those team meetings...all jokes aside...

Golson says he is ready for whatever the 2014 season holds.

“I’ve definitely grown up, matured more, I think that is the main difference, was me just maturing,” Golson said.

Head Coach Brian Kelly also cited his offensive line as one of the strengths he sees in this year's team. He also mentioned senior Cam McDaniel is their "best overall running back."