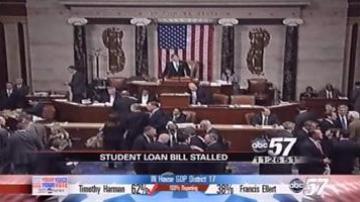 The student loan bill has hit a road block on Capitol Hill.

As predicted, it didn't move forward in the Senate. Tuesday along party lines, senators decided it wouldn't be formally taken up.

Majority leader Reid changed his vote to "no" in order to enter a motion to reconsider, perhaps indicating that there is a way forward being negotiated.

“This is a manufactured controversy,” said Sen. Mitch McConnell (R). “We all agree that the rates should not be allowed to go up."

If the bill isn't passed student loan rates will double by July 1.