Goshen Coach to close doors, up to 159 employees to be laid off 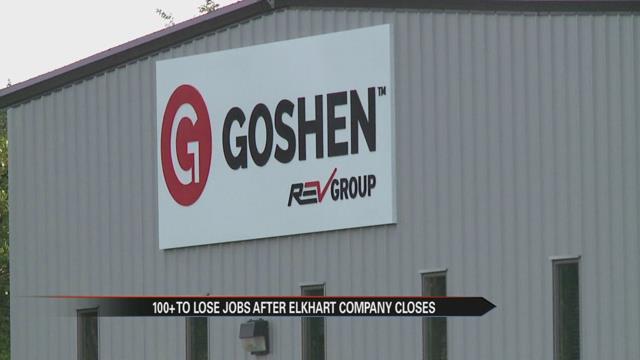 According to our reporting partners at the Elkhart Truth, Elkhart bus manufacturer, Goshen Coach, will be closing their doors by the end of November, putting many employees out of work.

For a county that was boasting low unemployment numbers, the news of Goshen Coach closing has many shocked and as many as 159 employees looking for work.

Jimmy Traver works at Regal Mold and Dye, directly across the street, just yards away from Goshen Coach.

“Honestly I had no clue it was coming. I work nights so I don’t see a lot of traffic coming in and out. But it’s terrible to hear that people are losing their jobs,” said Traver.

Up to 159 employees will be laid off by the end of November.

The closure will start October 31 with bus production ceasing by the end of November, that according to parent company, REV Bus Group, and President John Walsh.

Walsh confirming today to the Elkhart Truth, that the parent company plans to move a recreational vehicle firm into the facility and eventually employing up to 165 people.

Tim Vandenack is a reporter with the Elkhart Truth.

“He (Walsh) doesn’t know when that will happen and it’ll be a gradual process so it won’t be immediate,” said Vandenack.

“Really I hope that goes as best as possible to get people jobs in the area,” said Traver.

Walsh traveled to Elkhart Monday to inform current workers of the changes to Goshen Coach.

“You hate to see people that you drive by everyday out of work. So hopefully things are up and running as soon as possible so there are more jobs in the area,” said Traver.

ABC 57 News attempted to reach out to Walsh for a statement are still waiting a response.

The Department of Workforce Development said that it has activated the state’s Rapid Response Team to help those affected workers.