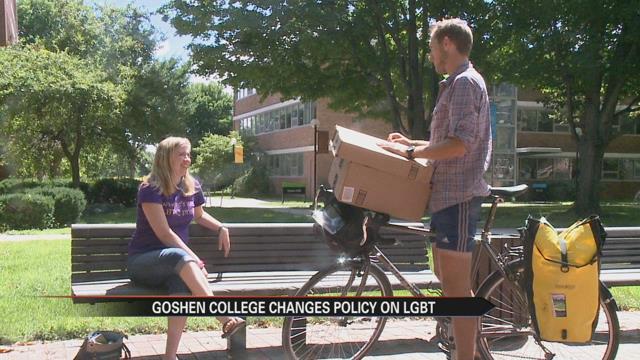 That’s the question Goshen College students have been asking the administration for years.

Monday, they got a response.

Goshen College announced they plan to change their conservative hiring restrictions and extend their non-discrimination hiring policy to people in same-sex relationships.

“We are striving to be a community that is welcoming to all including those who disagree with this decision and we believe that is the model that Jesus provided for us,” said Jodi Beyeler, Director of Communications for the school.

Over 200 current students, around 25 percent of the school’s population, were actively involved in the policy change.

When news broke on Monday, Deaton was able to see years of hard work pay off.

“To be honest, I was trying not to cry. I was really excited,” said Deaton.

That sense of excitement and passion is something the school’s faculty say they try to instill in their students no matter what their beliefs.

“Goshen College students in general are passionate, engaged, and are always striving to make the world a better place and they’ve definitely been passionate and engaged over the last number of years as they’ve worked at trying to make this policy change,” said Beyeler.