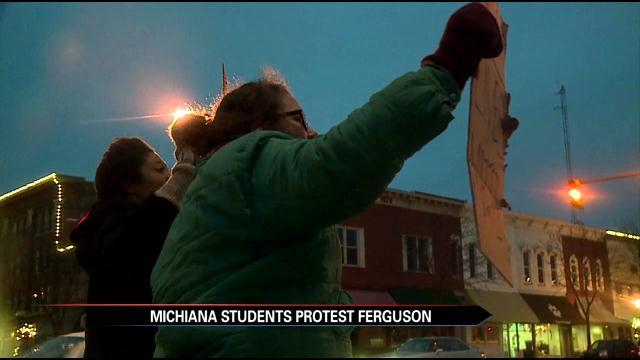 Unrest in Ferguson has spread to Goshen, as students from Goshen College gathered outside the courthouse to protest the grand jury's decision.

Roughly 20 college students protested between 3 p.m. and 6 p.m. They shouted phrases like, “Hands up, don't shoot!” to drivers passing by.

Malcolm Stovall, a Goshen College sophomore from Seattle, is passionate towards this cause because he believes what happened in Ferguson could happen in any city across the country.

“We are out here because we are very angry and irritated that Officer Wilson got away with murder,” says Stovall.

He wanted to orchestrate the protest Tuesday evening because he says it's a personal issue.

“As a black man in this society, that could have been me. That could've easily been me," said Stovall.

Fellow classmates joined in on the protest, regardless of race, and Stovall is proud of how united people are on this issue.

“It's not just African-Americans. It's people all over the world. It's white folks, it's everybody.”

The demonstration was done peacefully, and the only officers involved told the students to remain on the sidewalk during the protest.

The students say they will be back at the Elkhart County Courthouse in Goshen Wednesday night from three in the afternoon until six at night.

Anyone is welcome to join the demonstration.