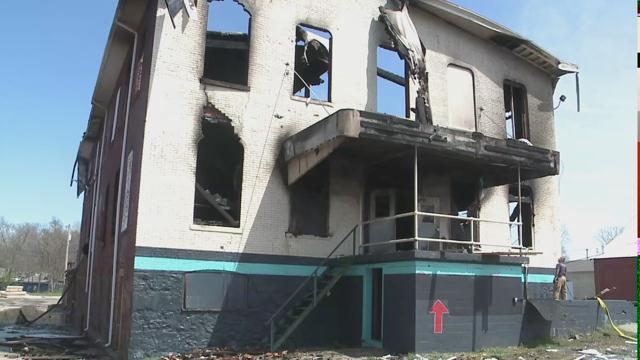 Hot spots continue to pop up at 521 Industrial Center. Fire crews were on the scene for more than 24 hours battling persistent flames.

Goshen Fire Chief Dan Sink says nobody is allowed to go into the building because of the collapsed roof. Those who had businesses inside the building have likely lost everything and those with neighboring shops have become casualties of the raging flames.

“There is one side of me that is bitter because of all this mess that I am having to go through, which I didn't ask for,” says Merle Bontrager, owner of Merle's Electric.

Water used by the fire department to battle the relentless fire flooded his shop which is attached to the building that caught fire Tuesday afternoon.

“There was a constant flow of water coming through my building from the other building where they were spraying,” explains Bontrager.

Twenty-four hours after the fire at 521 Industrial Center, crews were still on scene, and spraying water to put out persistent flames.

“They really don't want me to be in my building for fear if that end wall would collapse that it would fall on my roof and collapse my roof,” says Bontrager.

With entrance to the building not possible firefighters continue to fight flames from the outside and businesses like Vinyl Coverings by Mel can't even rummage through whatever is left of their belongings.

“I felt sorry for the lady that is renting at the bottom part over here. She lost her business because of all her machinery and everything and inventory ruined,” says Bontrager.

Fire crews left the scene around 3:00 p.m. But say they will continue to check on the building over night.

Sink says nothing leads him to believe the fire is suspicious. Investigators should have a cause on Friday.