GOSHEN, IND – This week the Elkhart River breached its banks for the second time in just over a year. This round wasn’t nearly as bad as the record flood in February 2018, but its additional evidence that heavy rain and flooding are a growing threat in our area.

Rogers park, the skate park and bus stop are all under water in Goshen due to minor flooding of the Elkhart River. pic.twitter.com/XbfgNfJnQK

This week Goshen saw more than three inches of rain, most of it over less than 48 hours. This was the cause of the rapid rise in the Elkhart River that overflowed into adjacent parks, roads and parking lots of the East Lake shopping center.

Water is rising towards Fitness Club in Goshen, which was devastated by the Feb. 2018 flooding. #inwx#floodingpic.twitter.com/wAqlHWptCt

The back-to-back, the nearly one-inch-plus deluge Monday and Tuesday are rare. 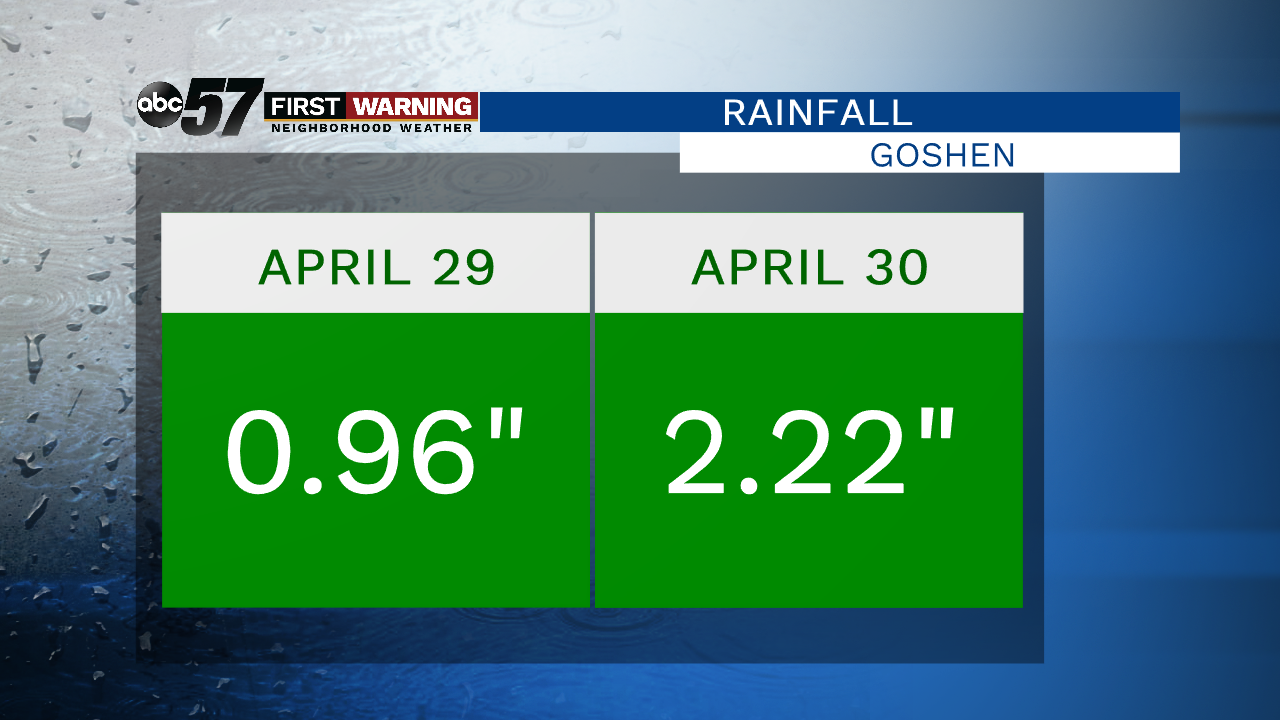 There have been have been just over 10 such events since 1950, around the time when observations first began at the Goshen Airport. 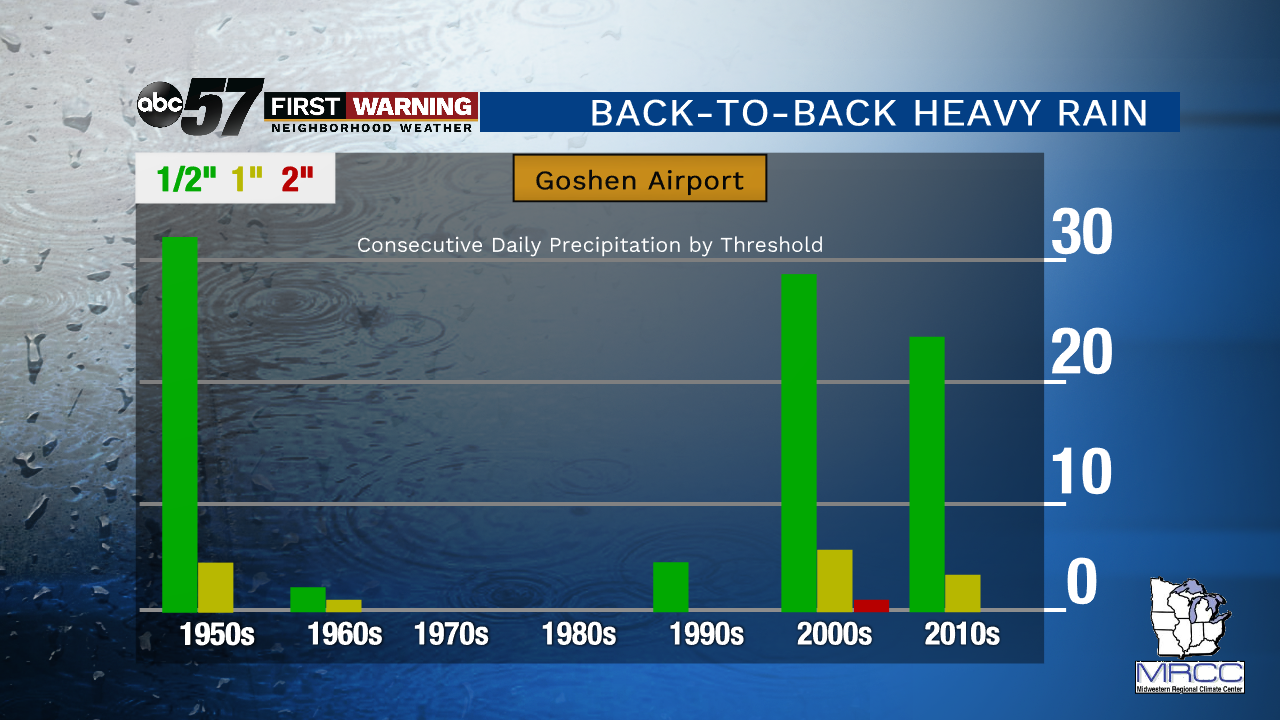 There have been nearly 90 back-to-back, half inch or more rain events over 70 years, a little more frequent but still seen as somewhat rare. Much of this timeframe saw very few of these events since the 1950s with a sudden uptick since the year 2000.

There’s another way to look at this. There have been 29 occurrences of two-day total rainfall of three inches or more at the Goshen Airport, 19 of those, or two thirds, have all come since the year 2000. 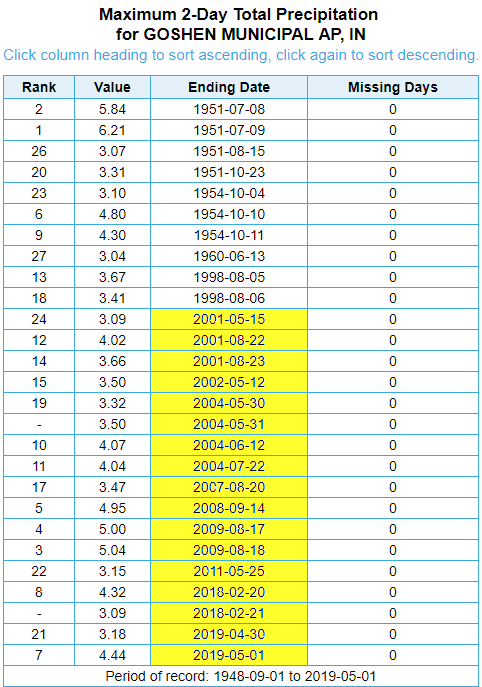 This all follows the projections made that a warming climate will increase the number of heavy rain events. A warmer atmosphere can hold and transport more water to rain-down. That combined with a stalled weather pattern can lead to extreme rain events and flooding. 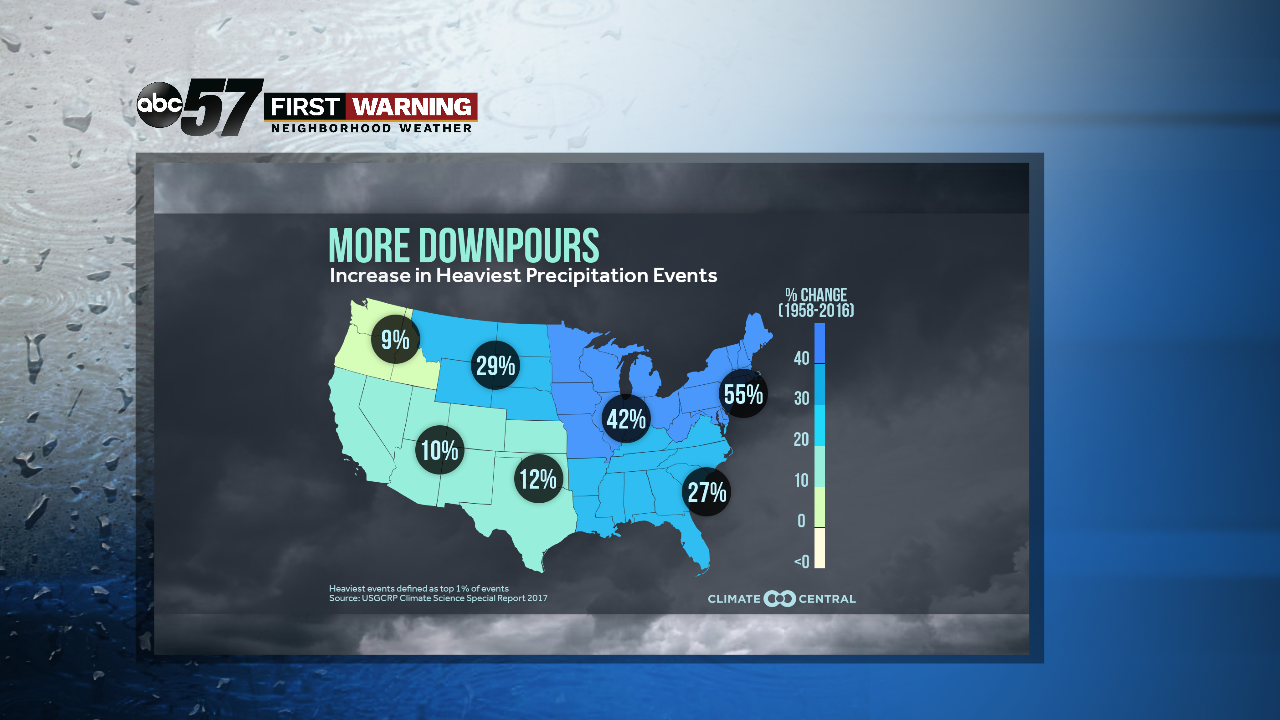 This week was another reminder that Michiana is not insulated from the impacts of climate change. As should last February’s record flooding and the record rain event in August of 2016.

Owners of Fitness Club in Goshen are sandbagging, because the Elkhart River is forecast to rise tonight #inwx#floodingpic.twitter.com/uB8Z1UfLUJ

The data for this article was compiled using the Midwest Regional Climate Center website, looking at a threshold for number of occurrences for at least two consecutive days of ½”, 1” and 2” rainfall.
The NOAA ACIS2 site was used to analyze the maximum two day total rain events at the Goshen Airport.

Some limitations in looking at data this way is the fact we keep data in terms of calendar days but rain doesn’t see midnight to midnight as a proper start-end time. So a few data points might be padded as extreme single day events such as August 17, 2008 when there was 5.00” of rain but only 0.04” on the 18th.

Additional thanks to the National Weather Service of Northern Indiana for consulting on these data sets.