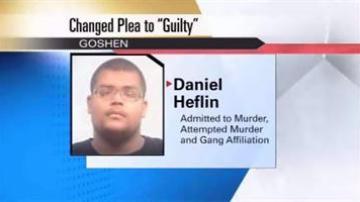 GOSHEN, Ind. -- In an ABC57 update, just days before Daniel Heflin was supposed to face a jury, he changed his not guilty plea to guilty in order to avoid trial.

The 24-year-old from Goshen admitted to murder, attempted murder and gang affiliation. He's accused of shooting and killing 26-year-old John Staub after a fight back in March.

Heflin will most likely be sentenced to 90 years in prison.

Also connected to this case, William Terry, was sentenced to 25 years in prison for conspiracy to commit murder.