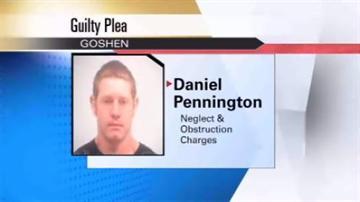 Daniel Pennington has also pleaded guilty to obstruction of justice in the death of 19-month-old Mariah Gibson.

Originally Pennington told police the girl had been a victim of a hit and run. Later, he admitted the toddler had actually been inside his truck. That's when she fell out and was run over.

He is scheduled to be sentenced May 2.