Goshen Mayor and legal experts weigh in on problem landlords 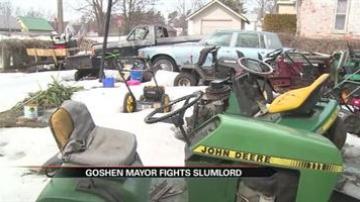 GOSHEN, Ind. -- Goshen Mayor Allan Kauffman spoke to ABC57 about Ron Davidhizar who owns more than 150 properties scattered throughout the city. Kauffman says Davidhizar's eyesore properties bring down otherwise decent neighborhoods. He says the battle with this particular landlord has been ongoing for decades.

"He treats some of these houses like somebody would treat an antique car. You buy an antique car and you buy a second one so you can part it up and keep one running. Well, he does that with houses. He takes the appliances, he takes the kitchen, he takes the furnace," said Kauffman.

Kauffman says he's fed up with this particular landlord.

"My predecessor dealt with this particular landlord for 10 years while he was the mayor and I've been the mayor for 17 years and I've been dealing with it all that time. And we've just gotten to the point where our patience is beyond thin," said Kauffman.

He says it's because of landlords like Davidhizar who neglect their property and their tenants, that the city has put certain laws into place.

"If you have a property that you rent, it is supposed to be registered in the rental program and we inspect it every three years," said Kauffman.

Kauffman says Davidhizar has managed to work his way around a few loopholes in the system.

"Sometimes this guy will rent a property that hasn't been inspected yet or that didn't pass inspection and he hasn't fixed those things yet. Periodically we catch him doing stuff like that," said Kauffman.

After talking with the mayor we spoke with an attorney who explained a tenant's rights.

"There's something called the warranty of habitability which says that a tenant should expect to rent a property that's clean, safe and habitable," said Carie Schenk, Staff Attorney, Indiana Legal Services, South Bend.

We got a copy of one of Davidhizar's leases.

One line says all property on the premises may be sold without further notice should the lessee fail to pay rent when due.

Schenk says that is illegal.

"It's not allowed under the law. A landlord cannot prevent access, take, dispose of or remove a tenant's personal property without a court order," said Schenk.

When it comes to landlords, the mayor says there's only so much the city can do.

That's why it is important for tenants to know their rights.

The city of Goshen is taking Davidhizar to court right now, but the mayor says it's not the first time. He says it's hard to count how many times the city has dealt with Davidhizar.