Goshen mayor, residents react to construction proposal for US 33 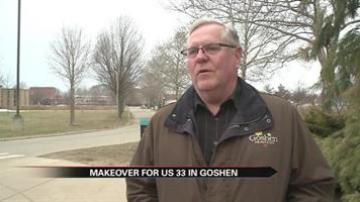 GOSHEN, Ind. -- The Indiana Department of Transportation held a public hearing about a proposal to reroute part of US33 in Goshen.

Thursday night INDOT presented its plan to residents as the final step before it’s looked over by the Federal Highway Administration for approval.

INDOT is proposing the Northern Connector:

The proposed project involves construction of approximately one mile of two-lane roadway on new alignment of which approximately 2,000 feet will be elevated. Beginning just north of the US 33/Sander Avenue intersection, the new alignment would diverge from the existing alignment at Monroe Street and run northerly across Madison Street and Jefferson Street. From that point it would turn northwesterly and parallel the Norfolk Southern Marion Branch railroad tracks until turning westerly, following Pike Street to its intersection with Main Street (SR 15), where it would rejoin existing US 33.

The project proposes to provide overpasses of Cottage Avenue, Lincoln Avenue, and the Northfolk Southern Marion Branch railroad spur which runs north-south along the east side of 9th Street. Improvements are proposed at the US 33 intersections with Main Street, 5th Street/Pike Street, Madison Street and Monroe Street. The elevated roadway section is between 10th Street and 7th Street. Short connector roadways will be provided to link Clinton Street with 7th Street, and to link Washington Street with 10th Street. Even though an overpass would be provided over the Norfolk Southern Marion Branch railroad spur, the 9th Street crossing of the railroad would be closed. An at-grade multi-use trail is proposed along the southerly/westerly side of the proposed new roadway, between 5th Street and Marion Street. Construction of the project would require approximately 26.0 acres of new permanent right-of-way as well as the displacement of 31 residential buildings and five businesses relocations.

The Northern Connector would take US 33 off of its existing route and build a new route along the railroad track in addition to overpasses.

If approved drivers say they look forward to the added road space, especially during fair time.

But not everyone will be happy if this project moves forward. 31 homes and five businesses will have to be torn down.

The mayor said he does sympathize with those affected but asks everyone to look at the bigger picture.

Residents can submit their opinions about this proposal on INDOT’s website until April 11th before it is reviewed by the Federal Highway Administration. If approved the project would start in 2016 and is hoped to be completed by 2017.