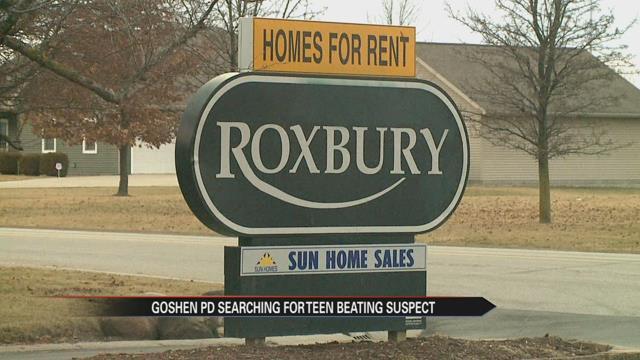 Goshen Police are investigating a beating that has landed a 16-year-old teenager in the hospital.

According to Goshen Police, a serious beating took place inside the Roxbury Park development just after 1 o’clock Sunday morning.

A police report says a 16-year-old teenage boy was hospitalized with multiple injuries to his head and neck.

The boy’s mother, who asked to remain anonymous for this interview, reported the incident to police.

She said her son was beaten twice, and when he returned home after the beatings, she said there were shoe prints visible on his head.

The teen and his family live down the road from Roxbury in Goshen’s Colonial Manor neighborhood.

The boy’s mother said a group of teenagers accused her son of stealing some cell phones.

She said even after searching her son for the phones and not finding them, the group of teenagers still beat him.

“This group of kids held him down while another boy beat him in the head,” she said. “He is in the hospital with some head injuries. He’s got some internal bleeding in his brain right now, so he’s being asked to stay in the hospital to keep an eye on him and get some other testing done in the morning to see if [the swelling] expanded. If it didn’t [expand], he gets released, or, if it got worse, he will be put in surgery.”

The victim’s mother said her son does have a bit of a troubled past, but she said she feels he did not take the cell phones in question because he offered to be searched by the other teenagers.

She’s asking anyone in the Roxbury Park area who may have seen or heard anything to contact authorities.