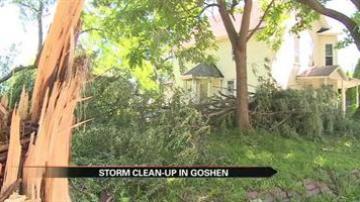 GOSHEN, Ind. -- Residents on N. 6th Street in Goshen just got their power back, but are still cleaning up from Tuesday morning's storms.

"I was under the stairwell because if man, if that wasn't a tornado, then I don't know what is," said Roel Cervantes of Goshen.

Cervantes says Monday's storm did some serious damage to his neighborhood.

"This wire, I don't know if it's live, but they've opened the street and kids are like going under that power line," said Cervantes.

Cervantes says residents have been trying to bounce back from the storm all week.

"I don't know if the city's going to pick up the branches and all the stuff that's all over the yards but that's how I get to spend my morning at the Fourth of July," said Cervantes.

It's clear he has come a long way when you see pictures of the damage he took the morning after the storm.

Cervantes says something good came out of the storm.

"After the storm did pass, all the neighbors came out. I mean this was like 1:30, 2 in the morning. It was real dark because there was no light," said Cervantes.

Neighbors checked on each other and made sure everyone was safe.

"It was good just to make sure everybody was ok, because it sounded worse I guess than it came out to be but it was pretty scary," said Cervantes.

Most of the residents have power back, but some who get their power through NIPSCO don't have power yet.