Goshen takes out the trash; may cost you. 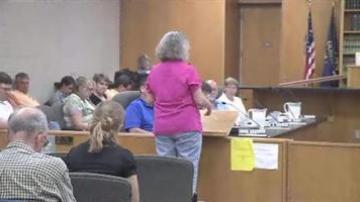 GOSHEN, Ind. --  Friday the Elkhart Mayor laid out some big budget cuts in response to a proposed trash service fee that failed.

Now the mayor of Goshen is pushing the council to pass a similar trash service fee in Goshen to avoid the same budget cuts.

Tuesday night the council heard public opinion for the first time and they were pretty much split right down the middle.

Barb Swartley has lived in Goshen since high school and she said even though she has never had to pay a trash fee, she doesn’t mind starting now.

“I am for it, because I understand a lot of money has gone out of the city’s pocket in the last couple of years,” said Barb Swartley.

Swartley said after seeing the proposed cuts in Elkhart, she would rather pay the trash fee in Goshen and keep her services.

“I read briefly what Mayor Dick Moore was proposing to cut,” said Swartley.

“I appreciate the fact that the council has not looked at cutting police force or street department,” said Swartley.

She said because the trash fee is half of what Elkhart was proposing, $5 the first year instead of $11.35, she thinks it is more likely to pass.

But Goshen neighbor Fred Buttell said there is no way this trash fee ordinance will go through.

“No, I do not believe it will pass,” said Buttell.

He said trash pick-up should be a city obligation.

“The very property taxes that we pay and have covered this for years,” said Buttell.

He said Goshen needs to start looking at the same kind of cuts that Elkhart has.

“There is absolutely no excuse that we cannot streamline government.  We need to cut some of our wild expenses and continue to pay for it out of property taxes,” said Buttell.

The council is tabling the trash fee ordinance until October.