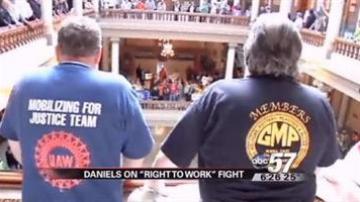 INDIANAPOLIS, Ind. -- Governor Mitch Daniels said he expects to catch some flack in the upcoming legislative session over right-to-work.

Twenty-two states have passed similar bills that get rid of "union dues" as a condition of employment.

Earlier this year, Indiana Democrats left the state to block right-to-work and education reform. Daniels said he hopes that won't happen this time.

"I don't know what they'll decide,” said Daniels. “Sure it'd be a concern. First of all, it would be a dereliction of duty. I thought it was very embarrassing for our state when it happened the first time. I really hope it won't happen. I'm guessing that it won't happen, but it's not for me to say."

Daniels hopes lawmakers will also pass a statewide smoking ban, and the governor said he has some "surprises" in next month's State of the State address.