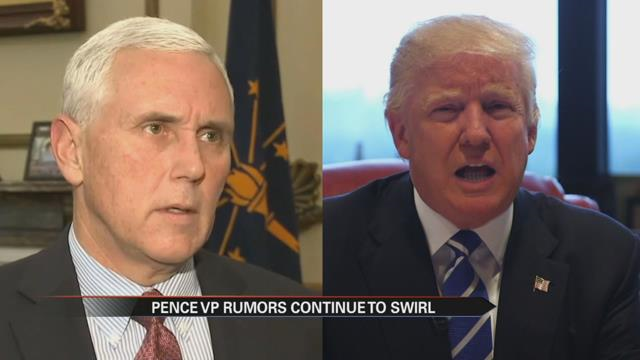 Indiana Governor Mike Pence may have big changes ahead in his political future. That will be the case if the presumptive Republican Presidential Nominee Donald Trump selects the Hoosier Governor to be his running mate.

There has been talk that Trump may choose Pence and now there is a campaign rally scheduled for Tuesday in Indianapolis to feature Trump and Pence.

On Monday Trump is scheduled to campaign with New Jersey Governor Chris Christie who may also be a potential candidate. Former House Speaker Newt Gingrich is also in the running among others.

If Pence is chosen as running mate, he has until Friday to drop out of the Governor's Race. State law says that you cannot run for two offices at the same time.

It is possible that the Hoosier state and the nation will know the decision within the days to come ahead of the Republican National Convention next week.