Grace Kelly: Growing up in a football family 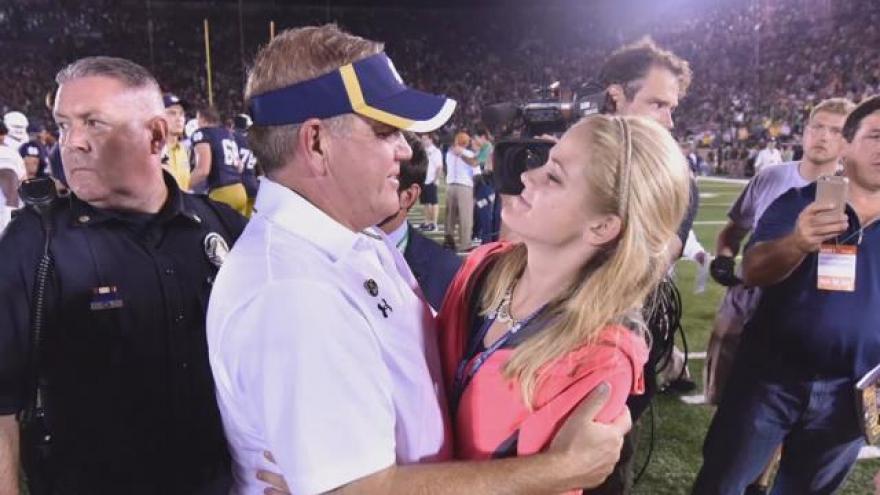 Grace Kelly is just like the other 80,000 fans at Notre Dame Stadium - she bleeds blue and gold. Unlike other fans, her blood also sets her apart. Her father is Notre Dame Head Coach Brian Kelly.

Grace has grown up on the sidelines with her dad and it has made her more than just a fan.

"Most probably wouldn't understand this but growing up in a football family, there's so many more things than just the sport itself," Grace said.

These things show up on the sidelines every Saturday for Grace.

It's a tour few people get to experience.

"Gracie would be a perfect one to follow because she's on the sideline and she's up in the box and then she's over somewhere else. She's you know, she's got an itinerary," said Brian Kelly.

Pregame is pretty busy, but once the game starts she's on the sidelines with her family.

The only thing she can do then is pray for an Irish win.

For most there's no grace in losing, except for this Grace.

"I don't think I could ever end a game without a hug from my dad, because it's tradition," Grace said. "I try to show him how proud and happy I am for him no matter win or lose and I think it's a really good connection that I've always had with my dad."

"That's her way and his way of supporting each other. And sometimes he needs that hug as much as she does and gets to be the dad," said Paqui Kelly, Grace's mother.