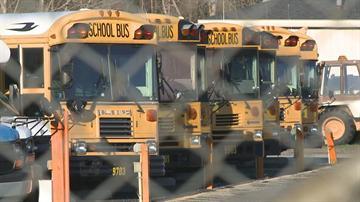 La Porte County Sheriff’s deputies were called to the 1600-block of West Springville Road at around 3:20 p.m. on Friday on a report of students fighting on a Michigan City Area School bus and attacking staff on the bus.  The two students involved had reportedly been horsing around by throwing a lanyard across the bus.  When Lucille Buke, a 73-year-old bus monitor, asked them to settle down the boys cursed at her and refused to stop.  Then bus driver Shaunda Gilbert, 35, stopped the bus and went to help Buke.

One of the boys became enraged when Gilbert and Buke asked him to calm down and he then tried to leave the bus.  When Gilbert tried to stop him he allegedly shoved her to the ground, jumped on top of her, grabbed her by the hair and slammed her head against the floor of the bus.  The other boy involved in the earlier disruptions joined in the beating.

Randy Rohrer, who lives on Springville Road, had noticed the bus stopped in the empty lot next to his home but didn’t think much of it until a neighbor ran to his door.

“He said the bus driver come out of the bus and her face is all red and she’s crying,” Rohrer described.  “Pulled her hair, he had gobs of hair all over the bus where he had pulled her hair out; face was all red from him punching her.”

Rohrer explained that he went to help the driver and when he got to the bus Buke and Patrick Morris, a 19-year-old bus monitor, were struggling to control the two boys.  Morris told Rohrer to watch one boy while he went to help Buke calm down the other child.

“I tried to hold him, just holding his shoulders down, but he was a powerful little boy,” Rohrer described.  “He kept pushing and pushing and I told him I was going to sit on him.”

Rohrer and the others were able to calm the boys down before sheriff’s deputies arrived.  Rohrer was still with one of the boys when the officers approached.

“When the cops got here he tried to fight the cop, when the cop kept trying to put the handcuffs on him he kept pulling his arm away,” he described.
“His hands was behind his back and he leaned against the squad car and he scratched it all the way down the sides of the squad car when they tried to take him to the squad car, he was a malicious little boy.”

According to the police report both boys admitted to attacking the staff on the bus.  They were returned to the custody of their parents and are facing battery misdemeanor charges.

“My kids are hyper, but nothing like that, that little boy he didn’t care about nothing,” Rohrer, a father of three, explained.  “I don’t know, these kids now a days are something else.”

The police report described that Gilbert, the bus driver, complained of head and neck pain but didn’t explain the full extent of her injuries.

Both boys are due in court in Michigan City in May.